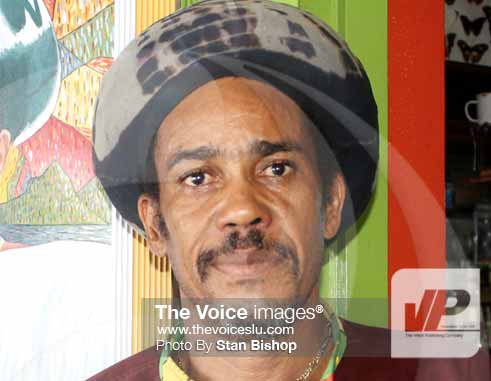 Sponsored
Share this post:
Long before Nina Compton made Saint Lucia an international hit with her fine cuisine on Bravo TV’s cooking show, “Top Chef”, there was another Saint Lucian chef making quite a name for himself and the island. His name is Robert “Chef Robby” Skeete and he has cooked up a real delicious bouillon of a success story.

Chef Robby tells me his passion for cooking has its genesis in both his grandmothers’ kitchens. He grew up in Vieux Fort with one grandmother when his mother was away studying architecture and later came up to Castries to stay with his other grandmother. As such, he credits them both for playing integral roles in his enthusiasm for the culinary arts.

After getting a soccer scholarship and leaving Saint Lucia for Trenton State College in New Jersey in 1984, the aspiring chef later transferred to Bridgewater State College in Massachusetts. That’s when he decided to switch from fine arts and attend culinary school instead. He subsequently went to Johnson & Wales University first for a few semesters before moving on to the Culinary Institute of America, one of the best universities in the world.

After returning to Saint Lucia, Chef Robby worked at the Royal St. Lucian briefly before leaving for Capone’s. Soon after, a job opening at Ladera enticed Chef Robby to cook up his creative magic in the all-natural produce concept embraced there. He ended up spending six years at Ladera.

After making quite a reputable name for himself at Ladera, Chef Robby decided to begin putting the ingredients together to open his own restaurant. His first attempt was the La Pergola Restaurant at Marlin Quay and he later tried his hand at Tropicana at the Rodney Bay Marina where he would remain open for 24 hours on some days.

“Tropicana became a household name for about four or five years,” Chef Robby tells me. “But then I heard about the availability of a place at La Place Carenage. We became an instant hit because we opened during the Jazz Festival season. Besides, there weren’t that many restaurants in the season at the time. But for the past 16 years, Caribbean Pirates has been here and has been a success story.”

So what’s so special about Caribbean Pirates’ cuisine that keeps patrons – local and foreign – coming back? As Chef Robby tells it, Caribbean Pirates’ menu is a potpourri on everything international but with a main focus on local cuisine.

“Infusion is what my cooking is really about,” Chef Robby said. “I incorporate every bit of knowledge I have of every international cuisine into our Caribbean cuisine.”

Every now and then, Chef Robby lectures at schools on topics such as eating healthy and eating local so as to ward off illnesses and reduce the national food import bill. He also mentors many students interested in the culinary arts, including those from the SLHTA’s youth apprenticeship programme (YAP), the National Skills Development Centre (NSDC) and the Springboard programme that trains young people hopeful of gaining employment on cruise ships. The renowned chef is also a judge in local culinary competitions, including the Schools’ Cook-Off.

“I’ve had a lot of success with that. I’ve had a lot of young chefs out there who have trained with me whose employers call me to say that these youngsters are phenomenal. So it gives me a lot of gratification to be involved in that,” Chef Robby said of his involvement in the chefs’ progress.

Caribbean Pirates, Chef Robby said, is virtually “Hell’s Kitchen” for many youngsters hoping to make it big in the culinary world. He currently has two youngsters in his kitchen, both of whom have learned his entire menu in two months. He believes they’ll do great things.

“They’re very dynamic and creative,” the restaurateur said. “I give them little challenges but I also give them exposure on my television programmes so that they gain a little extra confidence.”

Chef Robby is Food and Beverage Director on the St. Lucia Hotel & Tourism Association’s Board. That role saw him training the National Culinary Team for eight weeks this year as it prepared for the Taste of the Caribbean competition held in Miami in June. The ten-member team returned to Saint Lucia with two gold and five silver medals, among other individual awards.

Chef Robby has a new cooking show on Choice TV, “Cooking Caribbean Gourmet with Chef Robby”. He previously had another show on television, “Ready, Set, Cook”, which can be viewed on YouTube.

Among Chef Robby’s top priorities is to churn out quality service-oriented people from his restaurant so as to break the cliché that service is horrible in the Caribbean. If it has to start in Saint Lucia, he said, he remains committed to training as many young people as possible to do it. However, he wants to see more emphasis placed on local chefs getting the opportunity to shine in the kitchen.

“I want to see more of our hotels put our local produce on their menu,” Chef Robby said. “We also need to get more of our local chefs into our kitchens. We don’t need expats to come down here to prepare food in hotels for tourists.”

He also served up a main course of advice to aspiring chefs: “You get out of something what you’re willing to put into it. So if you put effort into something, you must get some success from it.”