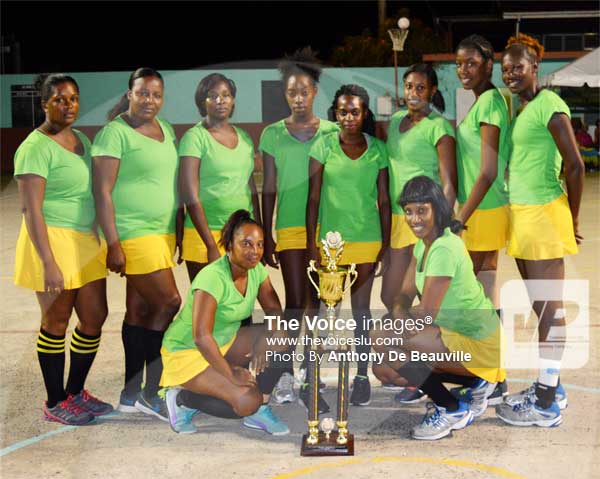 A record crowd was on hand at the Micoud Multi Purpose Court on Sunday evening to take in the thrills and excitement of the GaleRigobert Netball Championship.

On centre court Boca Juniors emergd as the champions defeating DFO 39 – 27 in the final.

For DFO, Goal Shoot EverlouLinour scored 21 from 34 attempts and Goal Attack PoushalSt.Juste had 6 from 18.

Meanwhile, the third place play off can best be described as the better match on the evening played between Ti Rocher and El Nino, with Ti Rocher winning 40 – 34. From the very first whistle El Nino was on fire as they took charge of the first quarter 15 – 7, but Ti Rocher with two changes going into the second quarter came back strong to level the score line 20 -20.

On the resumption following the half time break and going into the third quarter Ti Rocher continue where they left off as they applied relentless pressure on El Nino especially in the defence to leave the third quarter in the balance by one point 28 – 29 in favor of Ti Rocher.

With all eyes on centre court and all to play for including the third place silverware Ti Rocher with their crowd support behind them never looked in trouble as they grew in confidence both in offensive and defensive as they went on to score a further 11 points in the final quarter to win 40 – 30.