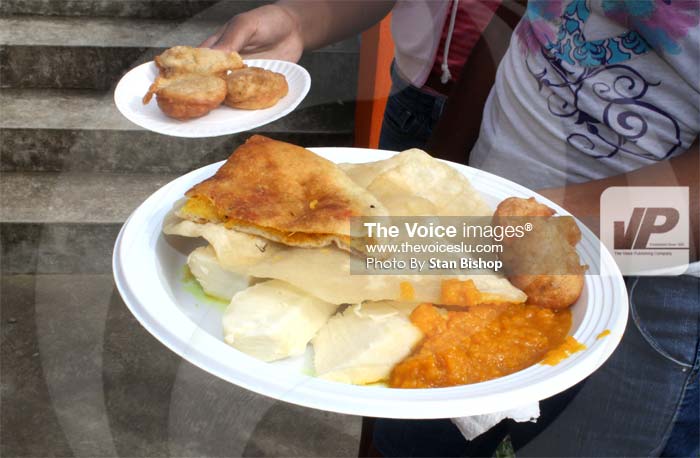 WHEN it comes to things cultural in Saint Lucia, Belle Vue, Vieux Fort has its fair share of bragging rights. The community is home to violin virtuoso, Joseph “Rameau” Poleon and is also represented in Parliament by Moses “Musa” Jn. Baptiste, whose poems flow as deep as the community’s ravines.

But last Sunday was a bit different. Although not a host community for this year’s Jounen Kwéyòl, the southern community made sure that its cultural impact would be felt this Creole Heritage Month. The Fete Kwéyòlen Belle Vue, organized by the Belle Vue Development Committee (BVDC) might still be the talk on the tongues of those who attended.

The event, held on the grounds of the Human Resource Development Centre, ran from around 1 p.m. to 11:00 p.m. No Kwéyòl fete worth its salt comes without great Kwéyòl food; as such, there was food aplenty: lobster, roast corn, roti, dhal puri, goolagoola, green fig and salt fish…

And what’s a good K wèyòl fete without great music, right? With performances from the Belle Vue La Rose Group, Third Degree, TwadisyonPiaye, Gregory Sinaise, Wnajman and Chant A Fire, the patrons probably got more than they bargained for.

But the main highlight of Sunday’s event was a rare performance from Saint Lucia’s legendary violinist and cultural icon, Joseph “Rameau” Poleon, who treated the fans to some of his favourites pieces. The 86-year-old, who reportedly hasn’t performed in public for nearly a decade, proved that time has not flattened his sharp, beautiful notes.

In these photos, we offer some highlights from last Sunday’s Fete Kwèyòlen Belle Vue.