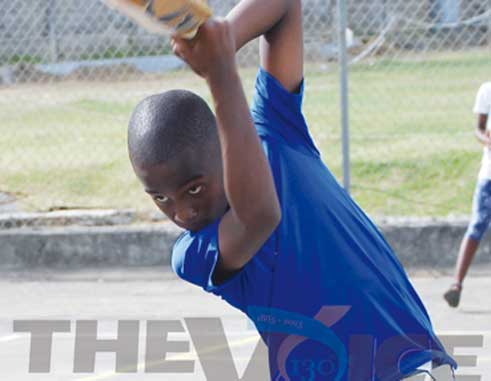 HE is only 10 years old; he is not ranked in his school as the No.1 batsman or bowler in any form of the game just yet, but he has a big dream as he continues to practice hard to impress his coach.

With St. Lucia Under-15’s recently retaining the Windward Islands championship, the doors are wide open for this young and aspiring cricketer to grab at every opportunity offered to him.

A Grade 5 student of Dame Pearlette Louisy Primary School who resides in the Mabouya Valley, Shawnell Edward is the son of St. Lucia’s Minister for Youth Development and Sports, Shawn Edward. He recently caught my attention during a practise session at the La RessourceMulti-Purpose Court under the watchful eyes of former national cricketer now coach Alton Crafton.

Edward spoke with THE VOICE about his future plans in the sport.

VOICE: Today you are here with Alton Crafton who is a qualified WICB cricket coach, a successful one at that. Tell me what exactly are you doing?

Edward: Today, I am doing some batting, high catching, fielding and bowling and after I am through I will be doing some back lifts and some footwork.

VOICE: Cricket is deemed a gentleman’s game. Are you prepared to work the long hours to get into tip top fitness and to work in the areas you consider yourself to be weak in?

Edward: I listen to instructions coming from the coach and I take them seriously, I am prepared to learn and put in the hard long hours and the hard work, because the two will bring me the success if I have to make it in life.

VOICE: In which areas are you interested, batting or bowling?

Edward: “I’m an all-rounder… I bowl left and bat right….. I am a fast bowler and a fast one at that.

VOICE: How far would you like to go in playing cricket?

Edward: As far as the Indian Premiere League.

VOICE: IPL? So what about playing for St. Lucia Under -15, under -19, Windward Islands and the West Indies?

Edward: I plan on representing my school at the secondary level when I do get there in a year’s time and work my way to the top

VOICE: Are you planning on playing the popular T20 format and which of the teams do you favour?

Edward: In the IPL, I will be looking at the Chennai Super Kings, the CPL – St. Lucia Zouks and the Big Bash Hobart Hurricanes in Australia.

VOICE: Apart from cricket what other sport are you involved in?

Edward: Football, although I’m not playing for a team as yet.