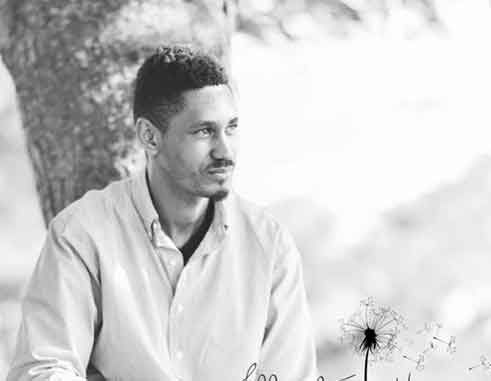 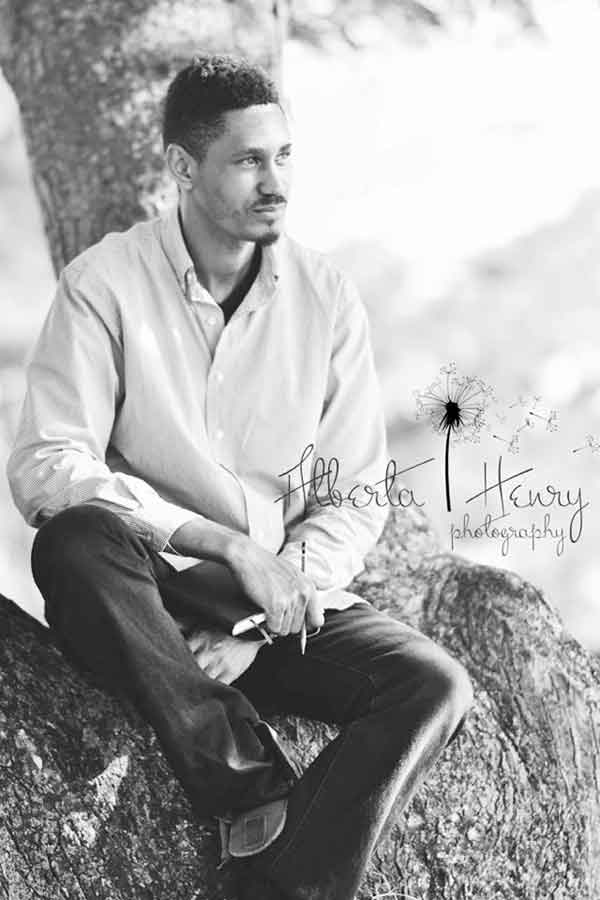 Simeon, who is from Saltibus, describes himself as simple, stubborn and determined, but his simplicity should never be confused for a lack of ambition or passion in his chosen career. He grew up in the countryside, with ample opportunities to enjoy and appreciate nature, his muse, which has been mirrored in many of his landscape paintings. Recently, I met with Simeon. He had just completed a painting for Gros-Islet Secondary’s graduation ceremony, and was busily working on a banner for the event with his work colleagues. I thought it would be helpful to share his story and outlook with readers, since much of what he discussed and stands for reinforces and adds to some of my previous discussions about following dreams. He’s gone beyond simply dreaming, and has turned his passion not just into a business, but a lifestyle.

Background
Though Simeon admitted that he did not recall when he first started painting, he recounted that he always loved it during his primary school days at Saltibus Combined. He later attended Choiseul Secondary School, where he first developed his talent in an academic setting. He studied Visual Arts at the CXC level and was recognized with an award for his excellent work in this area upon graduation. He later taught at Choiseul Combined after he, received his teaching certification and resumed teaching at Laborie Boys’ Primary.

Not long after, he became a member of Rotaract, an organization which he credits for significantly contributing to his development. Later, he served as its president. It was only after his enrolment at Grambling State University in Louisiana, where he first studied for the Bachelor’s degrees in Engineering and Visual Arts, that he really delved into his passion. During that time, he started to create landscape paintings, moved by the inspiration of his professors and his growing passion for art.

A Lifestyle of Artistic Expression
Aside from his teaching and engineering background, Simeon has embraced artistic expression in a way that demonstrates that it is not simply an ephemeral interest, but a lifelong passion. After developing a stronger interest in visual arts in college, his desire to live out the artistic lifestyle, explore and hone his abilities, led him on a six month excursion to south London, England, where he explored several schools, museums and participated in a few exhibitions. He later returned to the Caribbean and participated in an exhibition in Trinidad while exploring the galleries there. He admires Trinidadians for their art appreciation and stated, “they’re really advanced in their thinking of art.”

As he continues to embrace this lifestyle at home in St. Lucia, serving as an ambassador for art appreciation, his artistic expression lives on through the types of paintings he creates and painting styles he adopts. When asked about his preference between painting landscapes and portraits, he had this to say:

“Well, there’s no preference…. It’s like asking an artist, ‘What’s your favourite colour?’ You know … we use all the colours. For me to have a favourite colour, it’s difficult. But it’s not a preference. I paint landscapes because it helps me study nature. It helps me get closer to nature. I enjoy painting people. Actually, I want to start some form of portrait gallery in St. Lucia because I want to paint all our people ─all our prominent people, well known and not well known ─ so that the island could have a portrait gallery, some kind of historical reference. It’s not just picture, it’s artwork to show our history . . .. But when I do landscapes, I’m studying, I’m enjoying. When I do portraits, I’m trying to write history almost, you know? And then, when I do my abstract work, it is me battling with my mind trying to bring out a form of a message. And so, I do all the forms of art. But I really enjoy doing portraits because it brings out . . . the personality of people. I like to be around people. People enjoy being sketched and people enjoy being beautiful. I think people are very vain in a sense and when you paint a beautiful portrait they really enjoy, I feed off that energy.”

In his constant exercise of artistic expression, Simeon also uses the impressionist style, similar to the work of artists, Monet and van Gogh, in order to give art a voice. Though he’s often tempted to add to his paintings, in his words, he “leaves them to tell their own story.”

In the next instalment, we’ll explore more on Simeon’s work as an artist, his challenges and triumphs and how he’s continued to be an art ambassador.