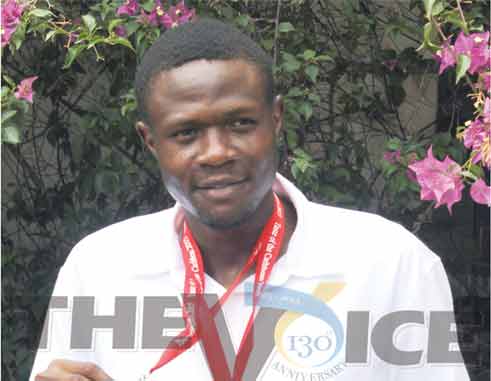 SOMETIMES finding out what one’s true mettle is occurs by taking a leap of faith.

Mario Alexander’s story is just another example of the endless possibilities that lie in store if only one has the right mix of positive attitude, discipline and the zeal to leave a life of failure behind by embarking on the road to a successful future.

This 28-year-old is now riding a high wave of success and prospects. But his business story did not start out smoothly. In fact, he left George Charles Secondary School in 2004 after being kicked out in Form Four for following bad company.

“I never graduated. So we used to hang around on the block and do weird stuff. I ended up getting arrested a few times. My life was really in a mess,” the Morne Fortune, Castries youth lamented recently.

One day in 2008, his sister told him about a job opening at Delirius, a popular bar in Rodney Bay. Alexander traded in the bad company and decided to give gainful employment a shot. However, he had to first overcome the fear of being interviewed since he had never been subjected to one before. Another handicap was that he did not have any educational qualifications or work experience to show as reference.

When asked by the interviewers what kind of job he was interested in, the then 19-year-old said he wanted to be a bar porter, a job that entails carrying ice and washing glasses. He was hired, felt happy and went home feeling proud about the new job he was about to begin the following day.

“When I got to Delirius on my first day of work, I felt small,” Alexander said. “I’d never seen so many people in my life before. I thought about all those people seeing me washing glasses. But when I looked up, I realized that nobody was even studying me.”

By the third month at Delirius, Alexander saw a friend, Lovell, whipping up a cocktail. After finding out from Lovell what the ingredients in that mojito were, Alexander asked Lovell to teach him how to concoct the beverage. Lovell obliged and after being successful at his new skill, Alexander pleaded with Lovell to pass on all orders for mojitos to him.

“I soon learned how to do strawberry daiquiris, amoretto sours and rum sours. But I wanted to do more. In the space of six months, I was able to elevate myself from a bar porter to a bartender, which was a big step.”

A fellow Delirius bartender, Alva, encouraged Alexander to go after his bartending dreams, promising that hard work would pay off in the end. Alexander admitted that he was a bit small-minded and never really grasped the useful advice that Alva was instilling in him. That changed one day when what Alva saw in him was also what management did as well.

“One day, I was told that I was opening the morning shift along with a waitress – just the two of us. I came in, stocked up everything and sat at the bar. I wanted to do a signature drink which, even if I left Delirius, it would be there permanently on the cocktail menu. I grabbed a few ingredients and made a martini.”

Alexander said Alva tasted the martini and was so impressed that he (Alva) expressed fears about losing his job to the newcomer. Alva asked him to create the same martini all over again after which Alva asked about how Alexander came up with such a creative idea. Alva even encouraged him to keep his game up and concentrate on graduating to mixology, the art or skill of preparing mixed drinks.

But fate would intercede in 2009 when after spending a year and two months at Delirius, Alexander would quit the job he was getting better at each cocktail he whipped up. He worked at several other bars “until things started getting bad”. Realizing that he had a skill that had already created major moves for him, Alexander returned to Delirius in 2013. The move proved golden.

“When I returned to Delirius, I began to break records. It was like I was on fire. It took me about ten months to win the Chairman’s Cocktail Challenge. It took me another year and six months to go to Miami to represent my country at this year’s Taste of the Caribbean Competition. I’m very proud of myself, especially when I compare the level I’m at with the level I was,” Alexander explained.

Alexander was the only bartender on this year’s seven-member culinary team that represented Saint Lucia in Miami from June 12-14. When he got the news that he was selected to the team, he said he was ambivalent: while he was getting the chance to represent his country at what he loves best, he was also going up against some of the region’s best bartenders from nine other countries. However, the rigorous training he received in preparation for the competition paid much dividends, he said.

Alexander’s citrus spiced punch based on a daiquiri and coconut lemon latte were among the competition’s best, earning him a silver medal for the Caribbean Bartender of the Year. He also picked up another silver medal by virtue of Saint Lucia placing second overall in the competition, losing to Barbados. He and the rest of the culinary team were also honoured at a recognition ceremony held at Sandals Halcyon on July 3. Despite the silvers, he feels golden.

“It’s like a dream how everything has happened. The only way I can explain it is that everything comes once in a lifetime. So getting a career you like fits right into that.”

Alexander’s long-term goals include graduating from mixology to gastronomy, the study of food and culture, with a particular focus on gourmet cuisine. He also has plans of opening his own bar and teaching others the ropes of his trade. For now, though, he’s giving thanks to Alva, Lovell, his manager Duncan, Michelle, his other bar staff, Chefs Rodroy and Robbie, and the members of this year’s culinary team for encouraging and teaching him to be better at what he does best.