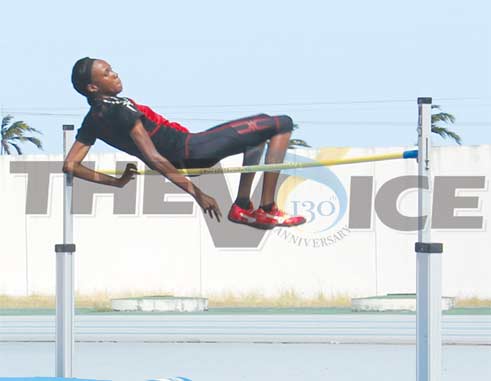 ST. LUCIA’S most decorated track and field athlete and reigning Sportswoman of the Year, Levern Donaline Spencer, last Saturday, qualified for this year’s World Championships scheduled for Beijing, China, making it the sixth consecutive time that she has done so far this global biennial event.

Competing at the Madrid World Challenge in Spain, Spencer enjoyed her best meet of the 2015 season when she cleared the qualifying mark of 1.94 metres to place second behind Spain’s No.1 and current No. 2 on the world list, hometown girl Ruth Beithia.

The prolific veteran high jumper from St. Lucia who has had a very consistent season with 10 clearances of 1.90 metres and above, entered the competition with the bar at 1.80 metres and had no misses up to her qualification mark of 1.94 metres.

Still nursing a slight foot injury, she then decided to call it a day after two attempts at the new height of 1.96 metres which was the height cleared by Beithia, the eventual winner.

That performance did not only qualify Spencer for the World Championships scheduled for August 22 – 30, but it also secured her ticket to next year’s Olympic Games to be held in Rio, Brazil.

This will be the star athlete’s third consecutive trip to the Olympics, as she looks forward to joining Dominic Johnson as the St. Lucians with the most Olympic representations.

Meanwhile, Spencer, who is into her 18th consecutive year of national representation, will later this week be joining the St. Lucian contingent at the ongoing Pan Am Games in Toronto, Canada, where she hopes to bring another medal home.