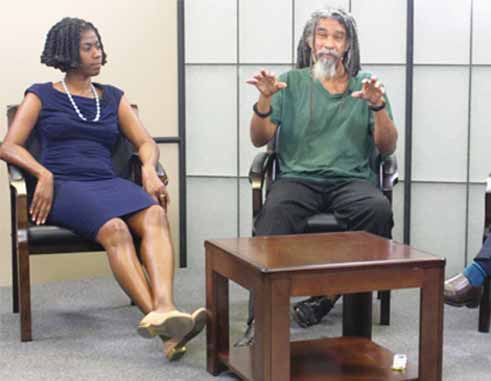 AS the countdown to this year’s Conference of the Parties (COP 21) in Paris, France closes in, regional stakeholders are leaving no stone unturned in their efforts to get an agreement signed that would put the world at a lesser risk to global warming.

So important is the region’s preparation for the Paris encounter that another round of sensitization talks was held this Thursday and Friday in Saint Lucia. The workshop targeted Caribbean journalists and artistes who can use their voices to speak out on the challenges confronting the Caribbean as a result of climate change.

Clauzel said the session was the brainchild of Minister for Sustainable Development, Energy, Science & Technology, Dr. James Fletcher, who has been leading the regional discussion on climate change in preparation for the major conference in France.

At that Paris conference, Clauzel said, decisions are expected to be taken about reducing greenhouse gas emissions and ensuring that global temperatures are contained over the next 50 to 100 years. He said the matter is crucial in order to “contain the devastation that we’re beginning to experience as a result of climate change and the impact it is having on small island developing states like ours.” The journalists and artistes, he added, seem the right people to use in getting the message across.

“It was decided that perhaps our journalists and artists may be best suited to provide that moral voice, to make that statement and use their creativity and communicate to the rest of the world what our islands, people and vulnerable communities are actually experiencing or will experience if something is not done to redress this critical situation,” Clauzel said.

Some of the Caribbean’s prominent artists and journalists have been invited to the two-day discussions to begin what Clauzel described as “a movement in the region that will catalyze thinking and create change both in the minds of our politicians and civil society about what really this is about.” Such artistes include Trinidad and Tobago’s David Rudder, Barbados’ Allison Hinds and Hippolyte.

“(It’s about) how we can influence the international community to take serious action and not treat us as second-class citizens in this world where we are experiencing the greatest brunt of the impact of climate change and not having contributed significantly to its occurrence,” Clauzel explained.

Clauzel said the intense weather systems the region has experienced over the past 15 to 20 years have been more frequent than those experienced over the century before then. The international scientific community, he said, has recognized that these changes have a direct link to the warming of the planet and that corrective measures needed to be taken.

“We are one disaster away from economic collapse,” he lamented.

Clauzel said it is estimated that the globe will become warmer by between 4 to 6 degrees by the end of this century, adding that it would mean “total collapse for our countries”.

“We’re having a hard time getting countries to agree to reduce their emissions at the level that will not see global temperatures increasing beyond 2 degrees (above pre-industrial levels). That has not been achieved as yet. So what we’re going for is a legally-binding agreement at COP 21 (Conference of the Parties) in Paris,” the Permanent Secretary said.

But just how optimistic is Clauzel that the international community will listen to let alone sign onto the much-anticipated conference five months away? According to him, it’s as important an opportunity to get it done right this time as is survival itself.

“The feeling is that there is a pressure on the developing countries of the world to do this and do it right,” Clauzel said. “There’s a moral pressure on them as well. This is perhaps the best chance we’ve ever had to get some kind of commitment on the part of the international community. To be honest, we’re not sure if it’s going to work but it will be a tough battle.”

For Hippolyte, Caribbean people especially need to become more conscious about treating the environment with the respect it deserves. The traditional agrarian practices of the past, he said, need to be embraced in a more organic and sustainable manner that does not disadvantage people’s livelihoods or threaten economic progress.

Hippolyte said that while there is no guarantee that the small island developing states will actually get what they’re asking for at the Paris talks, the emphasis needs to be placed on what happens beyond December.

“I think it is possible — with the pressure of civil society – that even if we don’t get all that we want in December, to press for those things beyond December,” Hippolyte said.

Panos Caribbean’s McLymont-Lafayette said 30 participants will be in Saint Lucia for the two-day talks, including about 12 journalists and 10 artistes participating fully or via Skype. She said she remains optimistic that the discussions will produce some desired results.

“I think we will be able to come out with some very concrete messages that we need people to get and understand about climate change as well as a strategy for how we are going to take this thing internationally to ensure that we are effective,” McLymont-Lafayette said.

McLymont-Lafayette believes that the upcoming climate change talks slated for Paris this December is a key moment for small island developing states to impress upon the rest of the world the need for using the planet sustainably in the pursuit of economic progress. At that meeting, an agreement governing the global emission of gases is due to be signed. A lot is at stake, she said.

Like Clauzel, she agreed that small island developing states do not contribute significantly to the global mess caused by the high emissions of greenhouse gases. At the Paris meeting, she said, “we have to be there to ensure that the target that will ensure our survival is really considered.”

“The Caribbean is asking for a 1.5 degrees (figure) to ensure that we survive. On the table right now is 4 degrees. So we have work to do over the next few months to implement that position so that they can really listen to what’s happening in the Caribbean where we are feeling the most impact of climate change,” McLymont-Lafayette said.