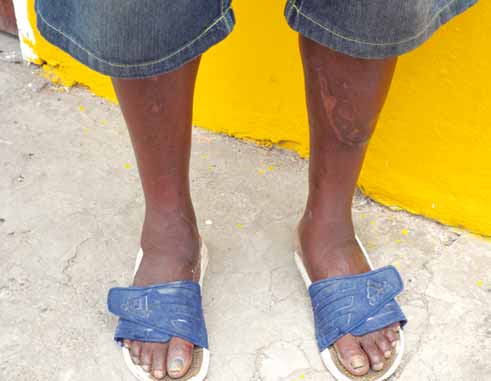 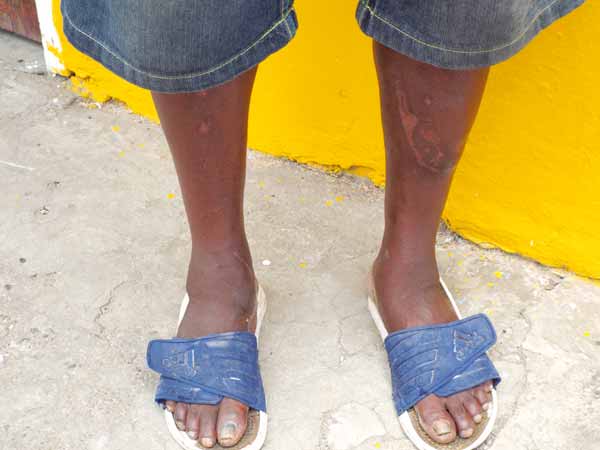 TODAY’S FITC went from a calm and jovial individual to a beast in the face of ill fortune that almost claimed his two legs.

Filbert Daniel of the George Charles Boulevard in Marchand made the news headlines on September 13, 2013 after he was struck down near his home by a truck carrying supermarket supplies and was left with two shattered legs.

The incident left the 53 year old in a real touch and go situation where not even doctors were sure whether he’d ever walk again.

However, the simple vendor refused to literally stay down and fought against all the odds to get back up and walk again.

As I waited for him to emerge from his home for the interview, it wasn’t until I saw Daniel walking towards me carrying a huge box of mangoes like absolutely nothing happened to him that I realised just how well he had healed.

Had it not been for the scars on his legs, I would have thought that I’d gotten the wrong person.

The VOICE: What was life like for you before the accident?

Filbert: Life was great! In fact it was wonderful, but since the accident, I’m not 100%. I still have a little way to go

The VOICE: Ok, well please talk me through your ordeal

Filbert: I was just sitting on the steps talking to another guy because there were two of us in the accident, his name is Cuthbert. Whilst we were talking, I told him that I was going to buy some juice to go home and as soon as I got up, I just saw a truck coming at me. I tried to run away but it was too late. It hit me and I fell in the corner. (We were standing at the scene of the accident and he indicated to me where it all happened). Then I saw a crowd of people gather to see what was going on with me. When I looked down at my left leg, I thought I was going to lose it and then when I arrived at the hospital, the doctors put some nuts and screws in my legs and that was it from there. I must say that the doctors did a good job for me…I have no complaints there. I still have some screws in there to get out, maybe in the next two months

The VOICE: Talk me through your recovery process.

Filbert: My recovery was really tough, really scruffy and hard. I went through a lot…a lot of injections and pain killers. Imagine, the walking, I had to do it all on my own because the doctors never gave me any crutches. I used a broomstick to walk. I was in a wheelchair and I got up from that wheelchair, took a broomstick and started to move about. Everyone, my friends and doctors called me a beast because they said I was really tough. When I went to see the doctor with my broomstick he said: “Man, I never expected to see that”. Everybody thought I would have lost my two legs but when people see me now, they say I’m a champ.

The VOICE: How long did it take for you to go from bedridden to walking around problem free?

The VOICE: How did the accident affect your life?

Filbert: It changed my life dramatically. The things I used to do, I can’t do them anymore but praise God, I’m walking about…I could move but I feel I’ll get stronger day by day.

The VOICE: Were you compensated by the people responsible for the accident?

Filbert: Yes, I was well compensated. Their insurance company compensated me and I got no problems from them. It helped me in a good way too. I can take care of my children and girlfriend…everything went well.

The VOICE: What would you say to people who have gone through similar traumas but still can’t walk and perhaps feel down and out, even on the brink of giving up?

Filbert: All I could say is don’t give up the fight, just be strong because I was being very strong and that’s why I am here now.