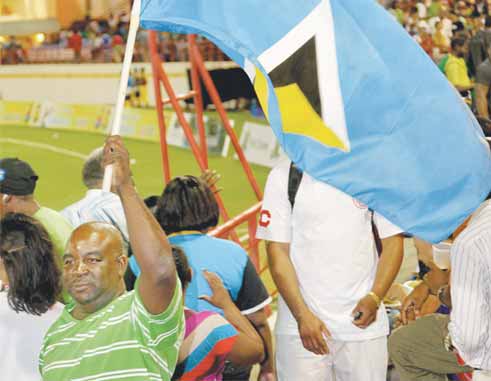 EXCITEMENT, colour, flags of all sizes, noise makers and the cricketing excellence of the Caribbean will be showcased again tomorrow evening when the much anticipated clash between the Guyana Amazon Warriors and the St. Lucia Zouks bowls off from 8.00 p.m. in the third edition of the Caribbean Premier League T20 Tournament.

The Beausejour Cricket Grounds with a capacity to hold 15,000 fans is long considered as “The venue to party” in the region and is expected to be come alive from first ball regardless of which team takes first knock.

Both teams will be looking for a win in this all important match up.

The Warriors went down to the Barbados Trident on the opening night at Kensington Oval, while the Zouks salvaged 1 point in a rain affected match against the Trinidad and Tobago Red Steel on Sunday.

The Warriors will depend heavily on Lendl Simmons, TillakaratneDilshan, Brad Hodge, LasithMalinga and ThisaraPerera as they expect to leave no stone unturned seeking their first win in this year’s tournament.

Likewise the Zouks, Captain Darren Sammy will be in a no nonsense mood when he takes the field in front of the home crowd, Sammy will have the likes of Ross Taylor, Kevin Pietersen, Johnson Charles, Henry Davids, Fidel Edwards, Andre Fletcher and Shakib Al Hasan in the mix to turn on the heat on the Warriors.

Meanwhile, last evening saw the St.Kitts and Nevis Patriots against the St. Lucia Zouks at the same venue. Upon going to press the battle on the square was still ongoing.