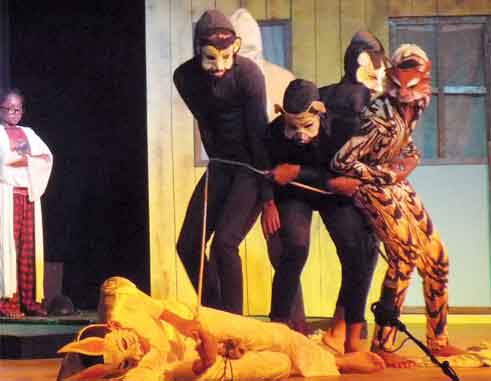 A massive breath of life has been breathed into formal theatre in St. Lucia with the production of Roderick “Roddy” Walcott’s “The Legend of Tom Fool” by the Kiddicrew Theatre Company, the theatrical genius of Kendel Hippolyte and music from the legendary Charles Cadet.

A cast of 16 youngsters, as far as three generations away from the legendary playwright, staged a show fit for international stages last week Wednesday evening at the National Cultural Centre.

The play was a three show event over stayed two days, Wednesday evening and Thursday afternoon and evening. On the opening night, the gala event was attended by a small crowd including Governor General Dame Pearlette Louisy, Charles Cadet, Robert Lee and Monsignor Patrick Anthony.

The show was the adaptation of Walcott’s 1958 play set in the fictitious land of Esperance and is about the lovable village idiot Tom Fool who experiences a rapid and astounding flood of knowledge about…everything, and quickly goes from the lovable Tom Fool to the arrogant President Tom Savant.

Shakeem Goddard, who played Tom, along with his cast mates made a show with a highly intellectual script look like second nature as the crew aged between 11-19 years old championed through the three hour play seemingly with ease.

Goddard told The VOICE that the workload was enormous and presented many challenges especially with the memorizing of his lines as he played three different parts, Tom Fool, Tom Savant and Tom The Wise but it was an absolute joy to play the part and in the end, the hard work was well worth it.

Being a young man of many talents, Goddard said he is on the right path of his desired career. “Acting is definitely a career that I’d like to pursue in the future, not only acting, but performance in general, because I also dance, play steel pan music and write music as I have a distinction in Music Theory. So I’m taking Arts as my career path. It’s something I like and I’d rather do it than something that I don’t like, like sitting in an office.”

Producer of Kiddicrew Theatre Company, June Frederick said this adaptation is only the beginning of the tribute being paid to Walcott and Charles Cadet.

She said every year for the next five years, there will be a staged production of one of Walcott’s plays.

Speaking of the overall production, Frederick said she was extremely pleased with the works of her actors but more so for the arduous work put in by the crew of directors and everyone who worked behind the scenes to ensure that the play went smoothly.

One of those individuals was award winning playwright, Kendel Hippolyte who served as the Dramaturge.

Hippolyte said he was pleased with the finished product and although there were many strong feelings of anxiety involved, he was able to breathe easier seeing everything fall into place.

The playwright, said Walcott was a huge inspiration for both him and Frederick and so they saw this play as a golden opportunity to pay homage to his work as well as Cadet and his legendary local musical compositions.

He said: “It’s quite a legacy to pass on and we want to pass it on”.

Asked whether he thouight theatre in St. Lucia could ever be revived, Hippolyte said in relation to the opening night, the numbers were understandably small as the show was held mid-week and it was a gala event and the ticket prices were higher. But he said theatre does stand a chance with the young talent rising to the challenge.

Hippolyte said: “Drama is picking up some momentum again but it’s always been an up and down situation and I think we’re just about moving into our up phase.”