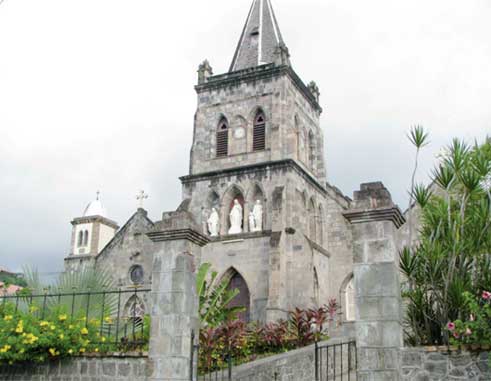 WHAT’S in a name? Often, we overlook the meanings attached to the names we hear and the names which have been given to the places we live and visit.

Our Island Neighbours have many names which are so inspired by our French and British ancestors.

This week we take a look at the story behind the name Roseau – the oldest urban settlement in the “nature isle” and the capital city of Dominica which is built on the old Kalinago village of Sairi.

The name “Roseau” translated from the French means “reeds”. The city was named sometime in the sixteenth and seventeen centuries by the French after the river reeds growing along the river bank. Over the centuries, several conflicts emerged between the French and the British. The inevitable result is the existence of both French and English architecture and street names. These include the sophistication of the Gregorian style churches.

While suburban heat is a given in such a congested setting, recreational facilities are available. These include botanical gardens, pitches and parks. Have you been to Roseau? Did your visit leaving a lasting impression? Tell us on facebook: Island Neighbours.

Happenings
Summertime often poses a major problem for parents and guardians. Where will they leave their children? How can they keep them meaningfully occupied? Well, this year the nature isle is gearing up to accommodate the youngsters very early. If your vacation spot is Dominica this year, register your children for a Digisummer Camp Experience. From July 6 to August 19 , the Harlem Sports centres in Dominica comes alive as children ages 4 to 9 are occupied in various activities. The camp costs $150.00 and will be held from 8:00 a.m. to 4:00 p.m. daily.

Neighbourly GetAways
Visitors say that you can’t enjoy Les Saintes if you don’t overnight! From Guadeloupe take a catamaran for about 18Euros to Les Saintes … Rent a scooter and be ready to enjoy seafood and Ti punch! Elsewhere … A trip through Roseau town will reveal the most diverse architecture; European, elegant and intriguing. Much of the brilliant architecture is centred on King George V street which also has many churches designed and built in colonial styles.

Let’s go Shopping!
Calling all shopaholics! Okay … time to strut your stuff on our West Indian runways with a little couture from the French Isle of Martinique. Boutiques like Crazy and Eve offer the latest in fashion for the professional woman, the chic, classy uptown girl and the young man looking to make an impression. This is your time for a quick makeover. Live a little! Shop a little!

History
Historical note! Les Abymes is the largest city of Guadeloupe with a population of 63,058. Did you know that Dominican writer Jean

Rhys was born in Roseau? Get to know your neighbours!