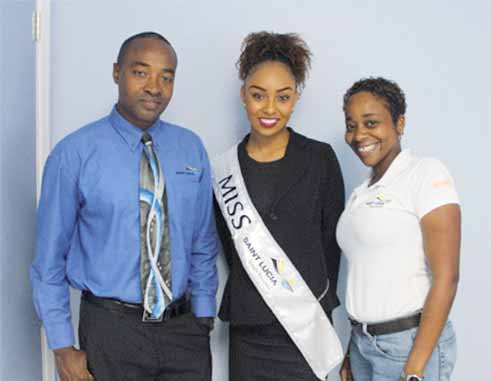 18 Year Old Says She Has What it Takes To Be Carnival Queen.

The Miss Saint Lucia Tourist Board says she’s very happy to be endorsed by the Board and has enjoyed the “very exciting experience so far” preparing for the show. During the course of that preparation, she says, she’s managed to pick up a few things.

“I’ve definitely learned a lot and met a lot of new people. I think that being part of this pageant has helped me develop into a more outgoing young lady and boost my confidence. With the support from the Tourist Board and my chaperone, Arlana Arthur, I definitely think I have what it takes to go out there and represent,” Bruce tells The VOICE.

Bruce says she has always had an admiration for pageantry: seeing the contestants on stage looking confident, groomed and beautiful. It’s always been something she wanted to get into and when auditions came around this time, she saw the need to take the plunge.

“Before life takes its course, I definitely want to have that experience. So this year I saw the opportunity and went for it,” the teenager says.

A past student of Leon Hess Comprehensive Secondary School, Bruce received the Principal’s Award as well as multiple academic and sports awards at graduation. She’s an artist/entrepreneur and sells her artwork to local hotel boutiques. She’s also a national swimmer and has represented Saint Lucia for eight consecutive years at local and OECS swim meets.

“It’s a big thing to be able to represent your country, to go out there with the flag and know that you are doing something for the betterment of your country. So I’m very patriotic in that sense,” she explains.

Bruce also reads and writes music and has played the piano for six years having enrolled at the St. Lucia School of Music. She’s depending heavily on her musical talents for the upcoming pageant and has a few surprises for the judges and patrons.

“I’m bringing something very different in terms of energy,” Bruce says. “I’m a very energetic young lady. So I’m going out there to represent myself, my sponsor, my family, my chaperone and everyone else supporting me. In terms of my musical abilities, it would be great to bring that side of me to the show to bring a different energy.”

Bruce describes herself as being very disciplined, due in part to her parents whom she said instilled in her the right values.

“They’re very proud of the things my brother and I do. In fact, they’re very excited that I’m going up for the Carnival Queen Pageant because it’s definitely different from the other things I’m involved in,” Bruce tells The VOICE.

Winning the pageant would mean the world to her, she says, adding that she’s thankful to everyone who’s supported her and shown her love. She’s also interested in participating in future pageants and working with the SLTB on future projects.

“I couldn’t have asked for a better sponsor. I think the Saint Lucia Tourist Board does a great job at marketing and encapsulating the true beauty and meaning of Saint Lucia in many ways. There are so many events that help to showcase the beauty of our island and by working with the SLTB I can promote my island,” Bruce explains.

Bruce’s advice to young people: “I have a firm belief that anything you put your mind to, you can do it. I’m the kind of person who wants to excel at everything I do. I stated swimming just so I could learn to swim. Then I saw people competing in swimming and soon I wanted to compete as well. So I’ve always had that hunger to compete. The same thing happened with painting. So my advice to young people who want to explore their talents is that God gave everyone a special talent. You may not find it at first, but you will eventually find it. My mantra is patience, persistence and perseverance. These Ps come in handy when you face the challenges that come in the way of your dreams.”

SLTB’s Public Relations Manager, John Emmanuel, says Bruce stands a great chance at continuing the winning ways of previous Carnival Queens who represented the Saint Lucia Tourist Board in previous years, including Amy Stephen who won the title in 2013. Emmanuel said Bruce will be partnering with the SLTB on a number of marketing and advertising initiatives, including the Wedding Symposium, Saint Lucia Jazz & Arts Festival, Health and Wellness Retreat, Atlantic Rally for Cruisers (ARC), Piton Awards, and so on.

“The Saint Lucia Tourist Board is serious about its engagement with young people and Carnival. We’re investing more than $10,000 just to sponsor our contestant. We’re happy for all the other agencies that have also seen the need to throw their support behind Carnival,” Emmanuel explains.

SLTB’s Special Events Manager, Dahlia Guard, also thinks Bruce has the winning formula to claim the tiara next month. Guard said this year’s Carnival Queen Pageant will be a very interesting and competitive one. All of the other seven contestants are holding their own, she says, and have their strengths. Nevertheless, there’s seems to be something special about Bruce.

“I don’t mean to be biased but I think we got the perfect candidate for a lot of reasons. I think Laura Bruce encompasses all of the things required to be a Carnival Queen contestant. So we will do whatever we can to ensure that she does well and represents this organization at the highest level. So we wish her the best on July 4,” Guard says.