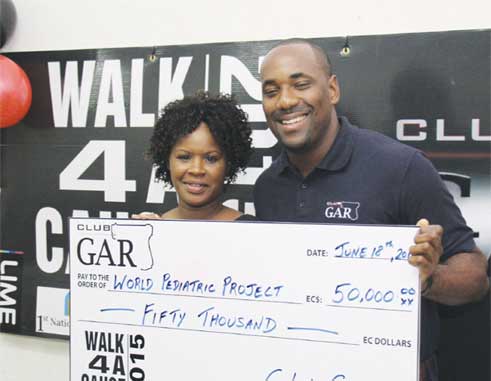 CLUB GAR on Thursday presented a cheque for $50,000.00 to the World Paediatric Project (WPP).

Thecheque was presented by Kareem Larcher, Club GAR member and project organizer for this year’s “Walk 4 a Cause”, to The WPP representative for St. Lucia Mrs. Sharon Stephen of the department of Human Services of the Ministry of Health.

The presentation ceremony took place at the Club GAR range at Bois d’Orange. In attendance was not only the representative of the WPP but also the many sponsors of this year’s event who were presented with plaques and certificates of appreciation. The main sponsors were LIME, 1st National Bank and Pinehill. The other sponsors were FICS, Domino’s Pizza, St. Lucia Mortgage Finance, Guardsman, St. Lucia IFC, St.Lucia Distillers and WLBL. The water sponsor was Bluewaters and prizes were provided by Just For Fun (1st Prize), LIME, Touch Therapies, Bay Gardens, KFC and Hardest Hard Restaurant. The winner of the 1st Prize was Dr. Ira Simmons while the second prize, a smart phone was won by Junior Joseph.

Larcher expressed his gratitude to the outlets where packages were sold: Steve’s Barber Shop, Blue Monkey, The IT Department of the RSLPF and the Bread Basket. He also thanked the electronic and print media for their promotion of the event over the past two years.

Asked about public support, Larcher said: “The success of the Walk is a result of the contributions we have received from the wider public who individually contributed by walking or by purchasing raffle tickets. Thanks to each and every one of you for this. Our initial target was $25,000. We didn’t imagine we would have been able to double it. We truly appreciate your support for this cause”

Walk 4 a Cause 2105 took place on May 31 with over 600 participants walking the four mile distance in support of the WPP which facilitates life changing medical intervention for children of St. Lucia and other developing countries. This year’s walk was not only bigger in numbers but also significantly larger in the amount raised. Last year $15,000 was raised by Walk 4 A Cause for the Cadet Corps.

The 2015 Walk marked the second in what has become an annual charity Walk by Club GAR aimed to raise awareness of and benefit deserving youth and youth groups and causes in St. Lucia. Next year’s walk is scheduled for the May 29, 2016.