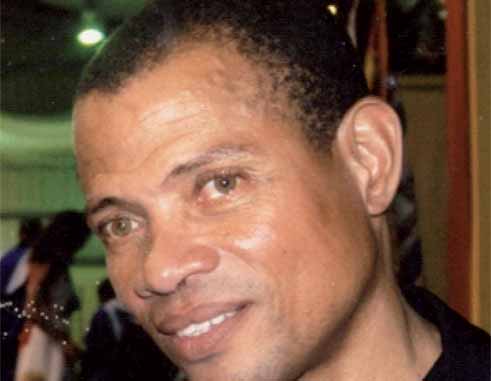 ARTIST Alwyn St. Omer is desperately seeking all the assistance he can muster in his attempt to make an almost 30-year-old dream become reality.

Ever since Saint Lucia became independent in 1979, there had always been a desire by authorities here to create a symbol of Saint Lucia’s independence, something that people can be proud of. The 56-year-old son of the late acclaimed painter and designer of the Saint Lucia flag, Sir Dunstan St. Omer, said his design won a competition back in 1986 for designing a proposed National Monument.

The competition was launched early enough to come up with a design so that the monument could be erected in time for Saint Lucia’s tenth anniversary of independence in February, 1989. The young St. Omer, who was in his twenties and studying art at the Jamaica School of Art at the time, came to Saint Lucia during his holiday break, worked on the design and submitted it.

“My main design won, but they liked the approaches and base as designed by architect, Alexis Felix. So the final design was a combination of my design and Alexis’s base and approaches. They liked the combination with my main super-structure of a bird rising in flight,” St. Omer said.

St. Omer had the ideal vision for the monument of the national bird – the Amazona Versicolor — in abstract rising in flight. The national bird was an endangered species and efforts were being made to save and promote the ‘Jacquot’ population which stood at around 300. St. Omer was also involved in doing the Jacquot Magazine that was published back then.

“I thought the monument would be a wonderful symbol of the spirit of survival,” St. Omer told The VOICE. “So I saw it fitting to produce a monument that would depict the survival of the parrot and the people’s aspirations rising in flight. That was my dream at the time.”

From the beginning, he said, former Prime Minister Sir John Compton and government minister, Romanus Lansiquot, were the ones spearheading the campaign to have the monument erected “as a symbol to express our nationalism.” There was even a sod turning ceremony held at TrouGarnier in 1989 where Lansiquot was quoted as saying that the monument would be a public tribute to Saint Lucians “who laboured hard to bring dignity, respect and pride to our island”. Prime Minister Compton performed the sod turning ceremony while the wife of the Acting Governor-General at the time unveiled a plaque on the monument’s proposed site.

St. Omer was given the task of preparing a 3-D model of the monument in concrete and steel, which he did under the guidance of one of Jamaica’s leading sculptors. He was studying sculpting at the time and in his class were some of the most avant-garde sculptors. With their help, he did a full-scale model which was launched in Saint Lucia for the island’s tenth anniversary of independence.

He said Kier International was eventually assigned the job of doing the feasibility study for the monument, so they had the model for a while. One of the concerns was that since Saint Lucia lies within a hurricane zone, there was the possibility that high winds would cause the monument’s wings to take flight.

“They tried it in a wind tunnel in England and the concrete model flew. So they suggested that the design be modified. In effect, the height would be 60 feet or more and instead of using concrete and steel, we would use of the modern metals and something that would allow us to have retractable wings. However, those plans fell through,” the artist explained.

At that time in the early 1990s, the estimated cost of building the National Monument was $3 million and the proposed location for its erection was the park opposite the National Insurance Corporation (NIC) building, overlooking the Castries Waterfront, St. Omer stated. With the recent advances in technology, he said the price tag for the monument might be less or the same. However, no definitive decision has been made since then to commission the monument.

“The last administration wanted to build this monument,” St. Omer said. “Even the Mayor of Castries at the time, Irving John, was interested in the project. He felt it would really elevate Castries’s stature and make it a modern city.”

St. Omer said he got some promising words from current Prime Minister, Dr. Kenny Anthony, in the past two years regarding the national monument coming to fruition. The Prime Minister, he said, indicated that government might be able to source the relevant finance to construct the monument but asked him to get an estimate done on the project first. However, that in itself comes with a few challenges.

“Actually, Alexis Felix and I have already put a team together to get the costing aspect done,” St. Omer told The VOICE. “But just getting the costing done costs a lot of money because you have to use the expertise of various experts who have to investigate the site and do technical drawings and stuff like that. So it might take about a year of planning and using the relevant architects and designers.”

For now, St. Omer and his team are depending on grant funding to be able to conduct the costing of the National Monument. He is seeking about $1 million to be able to create a working design from his three-dimensional model. The working design will then be given to a contractor. Any assistance to the cause, he said, is welcome and appreciated.

The artist said, his father, who passed away last month at age 87, really wanted to see this project get done in his lifetime. Unfortunately, that was not to be. He said his father felt the monument would be a masterpiece and that Saint Lucia deserved it. He believes there’s still time for the monument to come to fruition in time for the island’s next milestone.

“This monument is not for me; it’s for Saint Lucia. It would be a fantastic gift for Saint Lucians if it can be done in time for our fortieth anniversary of independence in 2019. We have time and it seems feasible that we can have it done within the next three years. We just need the funding that would make it possible,” St. Omer explained.

To contribute to the National Monument Project, you can contact Alwyn St. Omer at 721 4989.