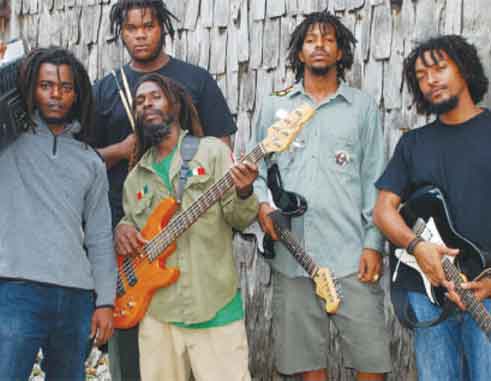 TAKING Blows, the second track on “Can’t Stop Us”, 4th World’s award winning album, is a powerfully emotional, defiant freedom song reminiscent of the music of Tracy Chapman and Bob Marley’s Redemption Song, and is dedicated to “all my fallen soldiers, and to my freedom fighters on the battle field.”

The song goes on to say: “I’ve been shot and brutalized, accused and victimized; I’ve been locked up in jail and criminalized; I’ve been betrayed, beaten, and crucified; I’ve been sold at a price just because of my pride; I’ve been taking blows, licking wounds and making foes; and sometimes I lose my life; they bury me, but still I rise.”

With such lyrics one cannot help but summon the atrocities of slavery, colonization, and imperialism; the persecutions and prejudices Rastafarians face in the system; the struggles and sacrifices that most artistes have to endure.

However, in scripting, directing and editing music videos, videographer Ali Charlemagne’s style is to side step the obvious, surface, literal interpretations and employ colour, graphic effects and symbolism to capture the mood, emotion, and context of the song. Accordingly, in Taking Blows, you will see none of the images that the lyrics conjure. Instead, symbolizing war and struggle, Marlon Florent, 4th World’s guitarist and sound engineer, is wearing a military helmet, and a flag bearer with a St. Lucian flag is somberly traversing the landscape to an unknown destination, as if to say defeat or no defeat, victory or no victory, the struggle will and must continue.

Open fields, seashores, and urban scape provide the background for the video, and alternating scenes of bright, sharp colours and dark, grim, gritty colours provide visual contrast and capture the mood and emotion of the song. The video is easy on the eye, it isn’t saturated with imagery and graphic effects; its contrasting alternating coloors, varying landscape, and selective symbolism encourage one to view it again and again.

Nijah “Coldsweat” St. Catherine, 4th World’s bandleader and lead singer, has been said to have a voice of opposites—sweet but harsh, melodious but gruff, smooth but edgy—a voice that some consider to be one of the best in world reggae. Well, after listening to Taking Blows and watching the video, one would have to admit that his voice was tailor made for the song, that few other artiste could have delivered the song with such power, conviction, and beauty, and that of all the songs on the album Taking Blows probably does the most justice to his amazing voice.

When Taking Blows was first released a radio announcer was so impressed with the song that despite the fact that it was just 4th World’s third release, he proclaimed that this was going to be the best song and biggest hit of the album. Four years later, given the appeal of the newly released video and the amount of traction it is gathering, the radio announcer’s proclamation may well be proven to have been prophesy.