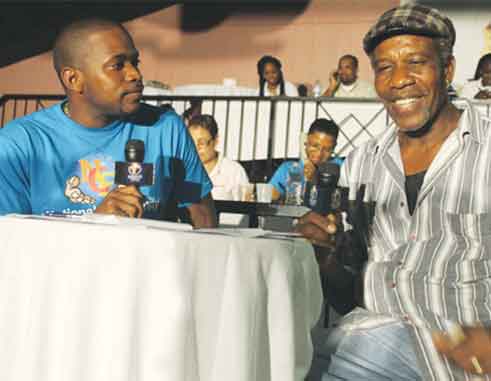 THE National Community Foundation (NCF) is getting ready to host its 12th Annual Telethon tomorrow at Spinners in Union.

NCF’s Executive Director, Madonna Monrose, told The VOICE this year’s telethon has been downsized due to high costs incurred last year. A spike in the cost of goods and services and the NCF having to undertake certain activities twice last year due to the postponement of the telethon are among the reasons for the scaled-down event this year, she said.

“This year we’re trying to see how much we can lower costs so that in the end we can have more funds to benefit our clients, which is what the telethon is really about,” Monrose said. “With the increased demand for our services, we believe the funds would be better spent helping the clients directly rather than putting on a very big event that not many people turn up for.”

There will not be the traditional family fun event this year, Monrose said. No bouncing castles, face painting, food booths, and the like. In fact, patrons will not even be required at the event. Only sponsors, performers, celebrities manning the phones and people desirous of handing over a donation and other invited guests will share the Spinners setting. She said that while the telethon had over the years incorporated the family and fun elements into the event, budget does not allow.

Tomorrow’s telethon format will be different, too, with an in-studio setting for the pledging session which will run from 1 p.m. to 6 p.m. During that session, information on the work of the NCF and how the non-profit organization has impacted the lives of many Saint Lucians will be broadcast live via NTN.

Among those slated to perform at this year’s telethon are Yannick Etienne, Voices of Praise, Teddyson John, Arthur Allain, Claudia “The Diva” Edward, and Stan Bishop.

Monrose said emphasis will also be placed on the NCF’s major and longtime donors through whose contributions the NCF has been able to deliver its services to the community. A cocktail party is to follow immediately after the pledging session.

“We’ll be providing a lot of information on the NCF so that people really understand what we do. Even after thirteen years of the organization being in existence, we still find people saying they don’t know what the NCF is or what it does,” Monrose explained.

Monrose is urging citizens to make their contributions to the NCF so that it can fund its many programmes. Over the years, she said, there has been a dip in support from individuals, with the lion’s share of funds raised coming from corporate sector partners.

The NCF is shooting for a $200,000 target this year, a modest sum which does not come close to the expenditure involved in funding its many programmes. According to the NCF, between August last year and April this year, approximately $423, 385 has been paid out to beneficiaries under the previously-mentioned eight categories.

Monrose said the NCF has been inundated with requests for medical assistance. For April alone, there were 30 cases for which the NCF approved a total of $34,000. The NCF’s education budget, she said, stands at $300,000 annually.