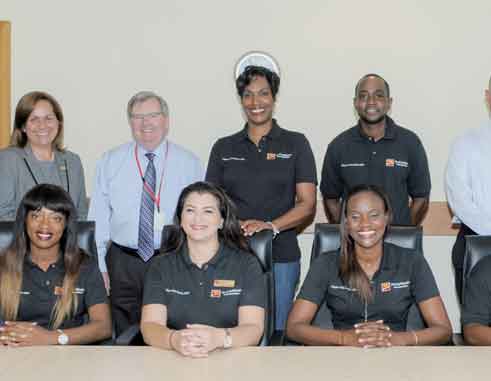 EIGHT men and women from around the region who were voted CIBC FirstCaribbean’s top performers, or “Players of the Series” in 2014, were recently celebrated by the bank for the second time this year.

In January, a group, comprising the eight Caribbean winners and their guests, joined outstanding employees from throughout the CIBC group for a week of celebratory events in Hawaii, where they got the chance to mingle with senior officers of the CIBC group and take part in business sessions and fun activities.

As a continuation of their “Player of the Series” recognition, the group recently visited Barbados for a celebration weekend with the bank’s senior Caribbean executives.

The weekend started with a tour of the Michael Mansoor Building, where they had brunch with the Senior Executive Team and spent some time touring the building and meeting their colleagues, many of whom they would have met only through the telephone or by email.

A cocktail reception in the evening at the Crane Resort where they were staying was followed by an awards dinner at Champers Restaurant the following evening, which brought the weekend to a close. The winners also went on a tour of the island which included a visit to the Animal Flower Cave.

The winners came from all levels of the bank, and received their awards for achievements in Sales, Customer Service, Leadership, Innovation and Teamwork (Helpful Partner).