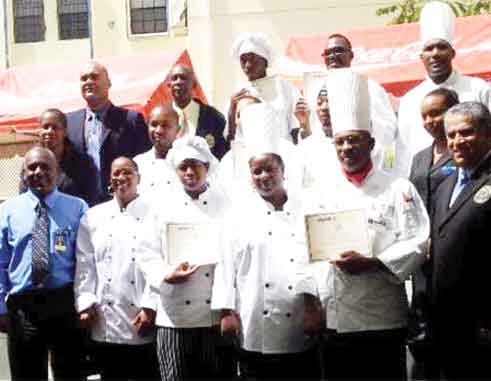 THE impact of the 2008 world financial crisis on the labour market of St Lucia was the subject of a recent study undertaken for the World Bank by a four-member team that included St Lucia’s Director of Statistics Edwin St Catherine.

Their report published last month, said that the statistical information that they had assembled should help decision makers and the public in the OECS to develop policy options that can sustain job creation and thereby enhance public welfare. It also can help gauge the effectiveness of policies over time, they said.

The evidence presented in their report showed how the recent financial crisis had significant and long-lasting negative impacts on the welfare of St. Lucians. The government of St. Lucia attempted to use fiscal policy to boost growth and enhance labour market opportunities in the island. Still, unemployed and underemployed St. Lucians together accounted for over 40 percent of the working-age employable population.

The following are some of the conclusions of the report:

Anecdotal evidence and GDP figures for St. Lucia indicate that the economic crisis had a significant adverse impact on the nation’s unemployment rate. GDP growth in St. Lucia has been more resilient than that of most Eastern Caribbean states. Nevertheless, the effect of the crisis on national income was significant. GDP declined in the years following the crisis.

The negative impact of the crisis was also evident at the micro level with labour market characteristics covering the period from 2008 to 2013 showing a substantial increase in the unemployment rate. While the proportion of the unemployed stood at just over 15 percent of working age (15 to 64 years of age) individuals in 2008, it increased gradually to a high of just below 24 percent in 2013 (an increase of nearly 9 percentage points).

The crisis led to a decrease in the availability and quality of jobs. The working age proportion of the population increased by 3.5 percentage points from 2008 to 2013. At the same time, unemployment increased by 8.6 points. So workforce growth was not accompanied by an increase in the demand for labour.

The proportion of working age individuals with more than one job fluctuated between 1 and 6 percent between 2008 and 2013, reaching a high of 5.9 percent in 2012. The share of workers with access to insurance through their employment (the National Insurance Corporation or privately provided coverage) has remained relatively stable at around 82 percent since 2011. However, the share of workers with a formal (written) contract has dropped somewhat: from 53.8 percent with a contract in 2011 to just above 49 percent in 2013.

The result was an 18 percent increase in the size of St. Lucia’s workforce over this period. The bulge in the 10–19 age group in the 2011 population pyramid indicates that the workforce will continue to grow over the next decade . While a growing labour force can be an asset for income generation and growth, absorbing the wave of new entrants every year poses a major challenge for the labour market.

Since 2008, the labour market has not been able to fully absorb the growth of the labour force, leading to both an increase in unemployment and under- employment. The workforce, by either broad or standard measures, increased steadily over the time period considered, rising on average 0.8 percent per year, from 74 percent in 2008 to 78 percent in 2013. At the same time, the unemployment rate increased by nearly 9 points, or an average of 1.8 points per year. In other words, 2 of every 3 individuals who entered the workforce between 2009 and 2013 were unable to find jobs.

The proportion of the working age population classified as underemployed moved in tandem with unemployment from late 2008 to late 2012, reaching a peak of approximately 18 percent in the third quarter of 2012. By the fourth quarter of 2013, this measure had dropped to its earlier levels (around 11 percent).

According to the report, these findings are not surprising. St. Lucia, like all OECS economies, relies heavily on industries such as tourism, construction, agriculture and financial services. Those in turn depend greatly on external demand from wealthier economies. When those fell into a deep recession, they reduced spending.

Travel and tourism related activities alone are estimated to account for over 30 percent of GDP and employment in St. Lucia. Moreover, St. Lucia also suffers from a high level of national debt. The debt burden limits the government’s ability to invest in social protection or in human capital, and generally constrains its capacity to respond effectively to macroeconomic shocks.

According to the report, the distribution of employment by employment status (salaried, self-employed, or family worker) remained largely unchanged between 2008 and 2013 in the non-agriculture sector. At the national level, the only group that experienced a marginal decline in its share of employment was “unpaid family worker or apprentice,” which declined from 4.6 percent in 2008 to 3 percent in 2013. Between 2008 and 2013, the distribution of employment among salaried, self-employed, and family workers remained virtually unchanged in the non-agricultural sector. During the same period, in the agriculture sector, there was a large increase in the share of self-employed (18.1 percentage points) and proportional declines in the remaining employment categories — the most significant being the decline in “unpaid family worker or apprentice.”

Construction employment declined between 2008 and 2013, falling from about 13 percent to 8 percent. Education, health and social services, on the other hand, rose from 4 percent in 2008 to 10 percent in 2013. This reflected an increase in public sector employment as well as the implementation of several government programmes meant to support growth and boost employment opportunities . This might also reflect a higher demand for re-training post crisis to improve labour market conditions.

The report said that overall, there was a marked transition from professional services (public and private) and construction to services and trade and to education, health and social services. However, the tourism industry (accommodation and food services) continued to employ about 13 percent of the working population through the entire period — consistent with government policies to support employment in the tourism sector with airline subsidies and tax reductions.

The trend toward higher levels in educational attainment started from a lower level in the agricultural sector than in non-agricultural employment. High-skilled workers shifted to the education, health and social services sector; low-skilled workers have shifted to accommodation and food ser vice and trade. All economic sectors saw an increase in the share of workers with tertiary education from 2008 to 2013 The increase was particularly pronounced in education, health, and social services sectors both in absolute and relative terms. The share of employees with only primary education declined in most sectors.

The 2010 census data showed an increase in emigration of more-educated workers from St. Lucia during the previous decade. The number of emigrants over the previous decade is about 5 percent of the current St. Lucia population. The emigrants’ average educational attainment was significantly higher than that of the average population . Nearly 55 percent of the emigrants cited either employment (28 percent) or education (27 percent) as the number one reason behind their decision to leave St. Lucia. During the same decade, remittances grew.