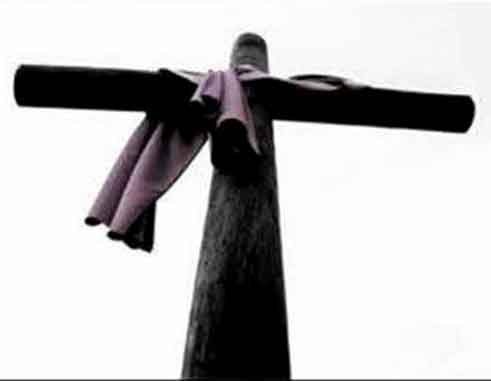 ‘WHEN I survey the wondrous cross on which the Prince of glory died….’ Nothing better describes for me the period of Holy Week, than these words. There are to be certain persons who will rattle these pointed lyrics without further thought to its deeper meaning. The story of Christianity is too recent an event in human history to have been completely fabricated. This is not intended as a sermon. It is merely to ponder why so many obviously ‘good’ people remain silent in the face of that crucifixion or the one this island now suffers. The crucifixion of Saint Lucia begs many questions, ‘why nothing happens,’ is just one! Why nothing happens when men of laws rule a society and criminals walk free. Why some criminals go free whilst the innocent cower behind burglar bars and are penalized by punitive taxes, such as VAT?

These thoughts came when I was stopped this week by someone who paid a compliment. ‘Only four Saint Lucians have stood up against Prime Minister Kenny Anthony: Sarah Flood Beaubrun, Mary Isaac, Guy Joseph and you. Mr. Josie.’ On closer examination, I concluded that, his words had little to do with Kenny Anthony. These four would likely behave the same way in similar circumstances, regardless who was Prime Minister.

True grit and character are tested in adversity. Every amateur sailor can navigate calm waters. The test comes when tides, currents and harsh adverse weather conditions conspire to make him or her (and the vessel), history.

Staying with that weather metaphor stimulates other questions. What is the most adverse situation bearing down on Saint Lucia today? I answer categorically: ‘unpunished crime and the dark clouds over its police.’ The situation is worse because, ‘Nothing happens,’ and everyone knows it. ‘And nothing happens’ is therefore more than mere cliché. It is a condemnation of the Criminal Justice System!

Every civilized society is troubled when crime goes unpunished. The demand for justice runs deep even in societies once considered primitive. Victims of rape, families of murdered children, home owners who have been burgled and lost items which money can’t replace, all shout for justice. Still, nothing happens! In the face of an apparently tardy, not to say delinquent Justice System, revenge can enter the mind of a peaceful and law abiding citizen.

As we observe Holy Week and survey the wondrous cross on which the Prince of glory died, we may extend our minds and ask whether there are undisclosed reasons that Jesus was plotted against and put to death. His challenge of the earlier Mosaic Law which advocated ‘an eye-for-an-eye’ was made manifest when he asked his followers ‘to turn the other cheek’ and later to ‘go and sin no more.’ Such teachings confirmed a more humane form of justice which is administered with compassion.

In keeping with the theme of the suffering of innocence on the cross, I turn to Nahum in Holy Writ, on the subject of Justice and Mercy. ‘When a defendant stands before a judge, he or she is at the mercy of the Court. If the defendant is innocent, the Court should be a refuge. But if the defendant is guilty, we expect the Court to exact punishment.’

Let me be clear, I have never been personally affected by the Justice System in Saint Lucia – or in any other country. Sure, I have been inside a Court House and I fully understand the respect and courtesies which are due, and expected, to a Court. In my youth a sitting of a Magistrate’s Court in Vieux-Fort was a really big deal. Neighbours came together and celebrated when a matter was decided in their friends favour.

I have served as a Parliamentarian in both the elected and selected chambers of the House. I remain convinced that laws are meant for the peace and good order of society even when some politicians do otherwise. I am also convinced that politics can be a force for good. But can these principles hold when so many are imprisoned without trial? Does the principle hold when the Government has a report which, if properly implement, can open-up a new window of justice, in the country?

To the practising Christian it would appear that the anti-Christ has risen to a point of power and prominence in this dear land. For proof, concerned citizens point to the attacks on the most vulnerable and innocent in the society – the youth. The anti-Christ follows children to schools’ sports and sits among them. They hug and embrace them even as they suffocate their parents with all sorts of taxes and discrimination for scarce jobs or promotions at work. They offer free this and free that, yet they refuse to pay for school transportation to get these same little ones to and from school safely. But that is not all!

From recent experiences can it be fairly asked whether Justice itself is on trial? Can justice be properly administered in the absence of adequate funding and with the right persons employed? We may boldly opine that, in this trial of the justice system, the anti-Christ tries hardest to pass their studied silence, while telling others to speak. Such conduct exposes the anti-Christ for what they truly represent. Can the average citizen not see or feel this?

One would have thought that the government would be happy to do all in its power to implement the latest report into police killings. Why is it afraid to act? Why wait for others to speak? Who is really in charge? But wait! Isn’t this the preferred way of Satan, using others to do his dirty work? Doesn’t this remind you, dear reader, of those who plotted and had Jesus crucified? They conspired to nail truth on a cross! But today, when we survey the wondrous cross on which the Prince of glory died, we know that joy will return, with a new resurrection – a new day will dawn. Only then will it be all right in the morning. Happy Easter every one and thanks for your words of encouragement.