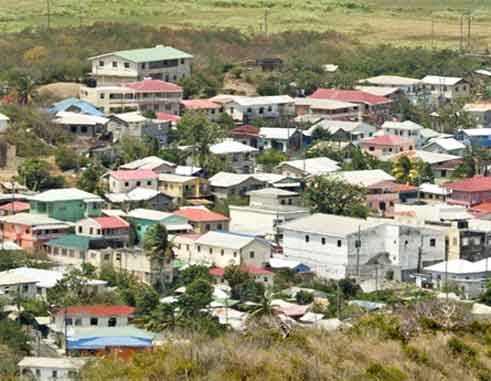 VIEUX FORT’S present predicament started some 12,000 years ago, in the fourth and final stage of St. Lucia’s formation. Following a period of volcanic activity, a huge fan-shaped mudslide that started at the centre of the island flowed across the Vieux Fort area, building up the land, filling up the crevices, and covering all but the tallest hills, leaving Moule-a-Chique as one of the few landmarks that was left to stand out, and the Vieux Fort area as one of the largest expanses of flat land on the island. It is this landslide, this freak of nature, this levelling of the Vieux Fort landscape, that has largely determined the town’s history, and accounts for its greatest blessing and yet its greatest curse.

As such, the problem inherent in the question of who runs Vieux Fort is seeded in this the flattening of its landscape. For indeed Vieux Fort has been a victim of its geography. As the largest expanse of flat and particularly coastal land on the island, Vieux Fort has been the site of choice for a succession of large, externally determined enterprises, of which the inhabitants had no say, and which have kept them landless and dependent on others for their survival. So in truth and in fact, Vieux Fort has always been run by outsiders. Hence the conclusion that Vieux Fort’s geography has been its greatest blessing and yet its greatest curse, and has given rise to the great irony that the history of the inhabitants of the part of the island with the most usable land, has been one of landlessness.

Before the coming of the Americans there was the coming of the Europeans who, once they had completed the messy business of pulling out and crushing the thorn in their sides they called the Caribs, the people they found on the island who called themselves Kalinagos and their island Iouanaloa, settled down to the lucrative business of combining African slave labour with cheaply acquired land to produce sugarcane. But where else but Vieux Fort would they plant the first seed of their greed, a crop requiring easy access to ships and large tracts of flat land that lent themselves to the laying of rail for transporting cane from field to mills, and sugar, rum and molasses from mills to anchored ships?

All this was great for the plantation owners but how about the slaves, the great majority of the inhabitants, the forefathers of most St. Lucians? Well, the absence of mountains in the Vieux Fort area made it difficult for the slaves to run away to freedom, and since most of the plains of Vieux Fort were suitable for sugar cultivation, there was little of the so called marginal lands for the slaves to grow their own food. Therefore, the slaves in Vieux Fort were likely more heavily dependent on the plantations for their survival than were slaves in most other parts of the island.

Slavery was abolished in 1838, but the dependency and landlessness of Vieux Fortians remained (thus they were no closer to running things) because there still wasn’t any land, marginal or otherwise, to be had. After all, the plantations, which owned most of the lands, did survive slavery. And even when, in 1937, the Vieux Fort sugar factory closed down, rendering seven thousand people jobless and leaving the sugar lands idle, Vieux Fortians remained landless because they could not afford to purchase the land and they couldn’t cultivate it for it still belonged to the owners of the defunct sugar factory.

Without buyers, the colonial government was left with little choice but to purchase the land from the sugar factory. However, once the land was in government hands, considering the thousands of people the factory had put out of work, many people must have been hopeful that the government would parcel out the land to the ex-sugar workers as part of a land settlement scheme.

But history rarely follows logic. The settlement of Vieux Fortians on the land on which they had toiled most of their lives and for which their forebears had been enslaved was not to be. Instead, the government of St. Lucia entered into an arrangement with Barbados whereby a Barbados Land Settlement Company would purchase not only the sugar factory but also 2,500 acres of land in the Vieux Fort area. Three-quarters of that land would be set aside for 2,000 land-hungry Bajan settlers, whereby each family would receive a plot of land on which to grow mostly sugarcane and to a lesser extent food crops. These settlers would live in fifty-two, two-room company-built cottages at Beauséjour.

But what was to become of the seven thousand unemployed Vieux Fortians? They would remain landless, of course, but maybe not idle, for they would obtain employment at the sugar factory and they would work as labourers on the remaining 600 acres of land the Barbadian Settlement Company had set aside to cultivate its own sugar. By 1940, the settlement scheme was in full swing. There were already 100 cottages at Beauséjour, housing 600 Bajan settlers.”

But history makes no promises. In the late 1930’s Hitler’s Germany began invading and conquering its neighbours. Having its own designs on the Pacific Islands, natural resource-poor Japan entered the war on the side of Hitler and drew a reluctant America into the war when it bombed Pearl Harbour. World War II shifted into high gear.

Vieux Fort’s geography once again determined its history. Due to the district’s large expanse of flat land lying right next to the coast, in exchange for reconditioned warships the Americans leased from the cash-strapped and war-weary British all of 3,031 acres of the plains of Vieux Fort for a military base. The American base subsumed the sugar lands so the Barbadian Settlement Company was dissolved, and the settlement scheme aborted. And any hope of displaced Vieux Fortians owning land and starting to run things grew even more distant because the Americans occupied the plains of Vieux Fort even more extensively than the sugar plantations ever did.

The voice of Bruce Williams, Vieux Fort’s great humanitarian fondly known as Daddy Bruce, seeking reparation from the Americans and British for the military occupation of the town, was a lone voice in a wilderness of apathy, his valiant efforts bore no fruit.

In modern times Vieux Fort’s expanse of flat land combined with its air and sea ports and American leftover road infrastructure has attracted many more large enterprises—Hewanorra International Airport, the Free Zone, industrial zones, the Fisheries Complex, Halcyon Days Hotel turned Club Med turned Coconut Bay, the national stadium, and more. For most of these enterprises Vieux Fortians had no more say in their establishment than they had in the establishment of the sugar industry, or the enslavement of their forefathers to serve the sugar plantations, or the establishment of the American military base, and they have good reason to question to what extent these initiatives were designed to serve their interest.

Therefore, no one can blame Vieux Fortians for being wary of these externally determined enterprises, and for being more sensitive than the rest of the island to being taken advantage of, to being exploited. For time and time again others have seemingly decided their fate, have brought enterprises usually short-lived, of which Vieux Fortians had no say, and usually these enterprises weren’t intended to improve their well-being but for their exploitation.

In “Phases”, an epic poem that traces the history of Vieux Fort, ModesteDownes, Vieux Fort’s multiple award winning poet whose two volumes of poetry are part of a growing body of Vieux Fort Llterature, succinctly and vividly captures the powerlessness of Vieux Fort in the face of wave after wave of impositions—“When king sugar ruled,” “Uncle Sam” and World War II, “The era of green gold,” “Halcyon Days,” “Investment by Invitation”—each wave leaving the town in exasperation. Of the last phase or wave that coincided with the exhilarating economic growth of the 1990’s and early 2000’s, that he coins the new Frontier of Growth, Progress, and Prosperity, the poet says: “And if this phase shall fail / No more shall the morning sunrise / Over at Lonely Tree’s bushy head / Keep hope alive / And I shall not be around / To watch you pick up the pieces.”

In her book, Sugar, Slavery and Settlement: A social history of Vieux Fort, St. Lucia, from Amerindian to the present, historian, Dr.JolienHarmsen, has posited that Vieux Fortians have learnt that they are not the deciders of their fate. They have learnt that they have no say, no control, over most of the events (as mentioned above) having the greatest impact on their lives. Accordingly, many Vieux Fortians have developed what Dr.Harmsen calls a hustler mentality. They have been conditioned to sit and wait for the next opportunity, the next decider of their fate that they hope to quickly exploit and then wait again for the next decider.

The problem with a hustler mentality, though, is that it is of short term focus, it chooses short term gains over potentially greater long term benefits, it precludes investing in the future, it undermines the accumulation of capital, an essential aspect of economic growth. The absence of a Vieux Fort entity looking after the interest of Vieux Fort, government’s continued free and unchecked hand in what happens in Vieux Fort, Vieux Fortians having little say in what projects are placed where in their community, and their continued landlessness, may be deepening their sense of powerlessness, and may be causing the hustler mentality that Dr.Harmsen speaks of to linger.

In closing, it may be useful to rephrase the question of who runs Vieux Fort, to how can Vieux Fort and other communities break the mould of history and empower themselves to start taking charge of their destiny, to gaining control over their lives, to move from a position of powerless non participants to proactive and effective citizens, to realize that they can make a contribution or solve problems and they have a right and responsibility to do so, to start running their town, villages, coQmmunities?

Dr. Reynolds is a leading member of the Vieux Fort Tourism Development Group, a lead consultant at EconoTech Consulting Services, managing director of Jako Productions, and author of three award willing books—Death by Fire (novel), The Struggle for Survival: an historical, political and socioeconomic perspective of St. Lucia, and The Stall Keeper (forthcoming novel).