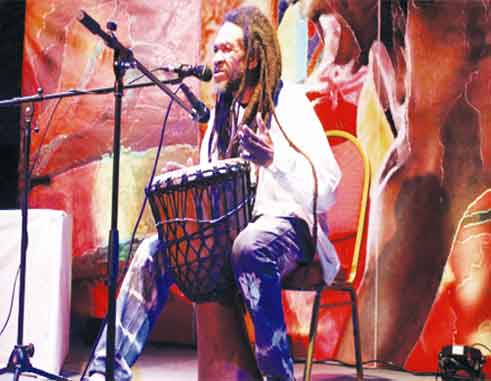 From Pushing ‘Dope’ To Spreading Hope

IN 1991, playwright/director, Hayden Forde, invited RasIzley to the National Cultural Centre where casting for a play was taking place. RasIzley attended the session hesitantly “just to check out the vibe and cool my head out a bit.”

The facilitator gave parts to all those who showed up and, noticing RasIzley sitting in the bleachers, invited him to try out for a role. At first he resisted, but after some prodding from her, he gave it a shot. She told him to walk on stage. His raw talent and rude boy bravado impressed the facilitator immediately.

“I heard her telling another facilitator that I was a natural and that I should stay on stage. She also told me that I should pursue acting seriously,” RasIzley said.

As RasIzley tells it, that introduction to the arts was a real and bittersweet one. At the time, he was in his late twenties and in a tight spot after police had arrested and charged him for possession of cocaine. During those days, he said, he was “doing a little cocaine hustling on the side” to make ends meet.

While waiting for his case to go through the courts, RasIzley “felt frustrated with just liming on the block, doing nothing”. It turns out that Forde’s intervention was the lifeline he needed to put his past behind and focus on the future. A new RasIzley was about to be born.

When the sentencing phase of his trial came up, RasIzley was given a nine-month prison term. At the time, he was still rehearsing for the upcoming play, “The Sea at Dauphin”, written by Derek Walcott. He ended up spending just nine days in prison after the intervention of a few people in the arts community, including former Director of Culture Jacques Compton, who vouched for his good character. Forde later brought RasIzley back to the National Cultural Centre to pick up his acting career where he had left it momentarily.

“From that time until now, I’ve just maintained myself in the arts and tried to stay positive. That break was like a magic wand for me because I was able to turn my life around for the better,” RasIzley said.

After performing in the “The Sea at Dauphin” in 1991, he was approached by poet/playwright KendelHippolyte, who asked him to join the Lighthouse Theatre. He resisted at first but after returning from CARIFESTA a year later, he took up Hippolyte’s offer, eventually being cast in nearly ten plays, including “Justina’s Calypso”, “De Yard”, “Cash Pandora”, “Cold Vibes”, “Ione”, and “The Hustlers”. He was also one of the voices on the popular 90s radio programme, “ApwéPlézi”.

RasIzley was born Leslie Nelson in 1961 at Barnard Hill, Castries but moved to La Clery when he was three years old. He said he wasn’t raised by his parents but rather by his grandfather, Frederick James, and aunts, Patricia and Juliet James. His mother lived in Choiseul. Taking the place of his absentee father was his uncle, Lionel, who was more of a father figure to him, encouraging him to pursue his poetic dreams. His aunt, Patricia, was a teacher and RasIzley describes her as being strict but someone whom he observed very closely, emulating her ways.

“She was always positive and always encouraged me to be positive in whatever I did. Like her, I ended up teaching, even though my angle was in sports,” the 53-year-old La Clery, Castries resident said.

RasIzley started playing football at age 13 and was part of the All-Stars team. While still a teenager, he began coaching football, developing his talents as a player and coach simultaneously.

While attending the Vide Bouteille Project (which later evolved into Castries Comprehensive Secondary School and which space is now occupied by Vide Bouteille Primary School), RasIzley said his teacher reprimanded him for “messing around” in class.

“She ordered me to recite a poem on the spot using two words: breeze and trees. So I came up with: ‘The breeze blows gently through the trees/ While I kneel to pray on aching knees.’ From that day, it all started. Because poetry bailed me out then, I have never stopped writing poems. I was also good at writing essays so whenever there was an essay competition, my teachers would encourage me to write essays. Sometimes they would read my essays to the class to encourage the other students,” he explained.

By 1979, RasIzley began growing his dreadlocks and later doing street poetry, encouraged by childhood friend Trescott “Sookoo” Augustin. He also performed at the Castries Town Hall, and took up toasting or freestyling, chanting about social issues on the mike at various block-o-ramas around the city. By 1983, he took up drumming.

In 1996, musician Emerson Nurse heard RasIzley reciting some of his lyrics. That was the beginning of a list of gigs with Nurse at various venues around the island. RasIzley’s rich vocal styling of jazz and poetry was a dynamic addition to Nurse’s band from 1996 to 2003.

After performing with Ronald “Boo” Hinkson at Jazz on the Square in 1997, RasIzley was approached by Trinidadian fashionista, Robert Young, who asked him whether he knew about rapso. After replying in the negative, Young told RasIzley to “go to Trinidad and ask for Brother Resistance and tell him I sent you.”

“I actually went to Trinidad, found Brother Resistance and told him Richard had sent me. That was like a passport because Brother Resistance and his wife made all the necessary arrangements for me to perform at various venues. I received rave reviews there and even appeared on the media,” RasIzley explained.

“Brother Resistance encouraged me to rap the lyrics instead of singing them.” After three trips to Trinidad in three consecutive years to perform there, he was urged by Brother Resistance to remain in Trinidad – permanently. Having a young son back in Saint Lucia, he could not take up the offer.

RasIzley is known to many people as the voice behind the popular song, “Nowhere To Go, Nothing To Do”. Over the years, he has also performed at Headphunk, the Saint Lucia Jazz & Arts Festival, The NCF Telethon and was a member of the St. Lucia Writers’ Forum and the Sugarcane Band. He is also a member of Take Over Tent.

“The arts have really helped me to change my life. The arts have played a major role in my transformation,” RasIzley said, reminiscing his past. “I mean, my song, “Nowhere To Go, Nothing To Do” and “Don’t Want To Be No Criminal”, say a lot about me. When I wrote that second song, I had just made a serious transition in my life – a literal turning-point. To be frank with you, I could have been dead by now.”

RasIzley said the song stemmed from an incident where a friend of his gave him a gun one day and came back a short while later to borrow it. He gave the gun to the friend who left for Saint Vincent and the Grenadines. That was the last he heard of the friend, RasIzley said.

“From that time, I just changed everything about myself. I made sure I dropped all negative things about myself,” he explained.

As a football coach, RasIzley has led teams to capture six tournaments, including three championships in the La Clery Football League and two in the Castries Football Union. He served as head coach for a National Under-16 football team that went to Trinidad in 2006. The team lost the first two matches and won the third.

RasIzley said he’d like to see the arts grow to the point where artists can live off of their talents as professionals. Apart from his artistic talents, he said he still has to go to another job that has nothing to do with the arts because the bills need to be paid. Nevertheless, he said he will continue to be a trailblazer so that future generations of youths could live off the arts and love doing it.

“A lot of artists tell me I inspire them and it’s all good. That’s why I’ve been going to various schools across the island to spread my message,” RasIzley said.

While going through his earliest handwritten poems, I noticed they were signed “RasIzley”. Having known him for the past 18 years and spelled his name as “RasIsley”, I asked him about the variance in spelling. He told me that throughout the years people have changed the spelling so “RasIsley” has become the normal usage. Beginning now, he said, he’s making another change in his life by reverting to “RasIzley”.