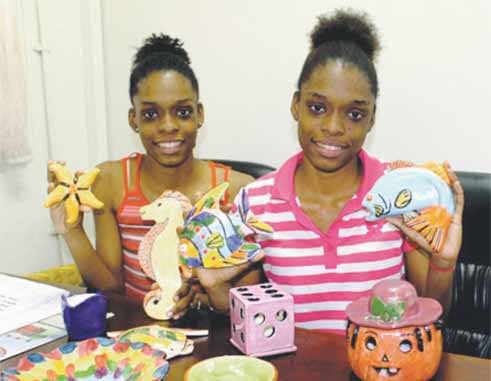 NINETEEN-YEAR-OLD La Clery, Castries twins, Sherel and ShawnelBranche, might not know it just yet but they seem to have started what might very well be their lifelong business partnership.

The teens’ love for ceramics dates back to their secondary school years and they seem determined to create their own employment through their creativity rather than simply sending out job applications.

It all started when Sherel took up ceramics in 2010 while a Form Three student at Castries Comprehensive Secondary School. Buoyed by the passion she had for the craft when she saw the pieces her mother sold in a craft shop when she (Sherel) was younger, Sherel followed her dreams that led to the clay road she now walks.

She obtained a Grade 3 in Visual Arts at CSEC, earning an A in Ceramics and started her business, Sherel Designs, about six months after leaving secondary school in 2013. She got right down to it.

“I started making jars, moving on to fridge magnets and plaques,” Sherel said. “Soon I was making special birthday items.”

Initially, it was difficult finding a market for her items. Things soon changed when a vendor at La Place Carenage began carrying the items in her booth. Later, a few vendors in the Castries Vendors Arcade followed suit. Sherel’s exquisite items soon found their way to Zaka Art Studio in Soufriere which is owned by her cousin. Despite that significant level of traction, the business is still in its budding stage.

Sherel creates the items at her La Clery home but rents a kiln at Gros Islet. She uses two types of clay: brown clay which she gets from Cul-de-Sac and white clay which she has to import. Sourcing white clay and the paints required for the process of creating the pieces are some of the challenges the teenager faces. Coming up with designs and owning her own kiln, she added, are others.

Last year, Sherel took a three-month course at the School of Arts at Sans Soucis to hone her skills. While she has not participated in any trade exhibition thus far, Sherel looks forward to doing just that so she can showcase her talents and network with prospective buyers. She also intends attending creative and business workshops for young entrepreneurs. The better she becomes at her business, she said, the better it would be for business. She’s already aiming high.

“I would really love to see my items at all of our hotels,” Sherel said. “I’ve already tried pitching my items to one hotel, East Winds, and hope to approach the others when I would have made more items.”

Her sister, Shawnel, helps her with almost everything related to making the pieces. While Shawnel didn’t do ceramics as a subject while she attended Entrepot Secondary School, she was so encouraged by her sister that she, too, ended up taking the course at the School of Arts. Her sister, she said, inspired her interest in ceramics.

“While I was still at school, I would watch my sister do ceramics and was always interested in it,” Shawnel said. “The subject was not offered at my school, so I didn’t get the chance to do it there. So after leaving secondary school, I started helping her. Most times, I would help with painting the pieces.”

The twins said the best rewards come whenever they sell an item. The fact that they created something that someone else appreciated enough to buy is priceless, they said.

It is often said that the devil finds work for idle hands. But these twin teens are proving that schools are indeed the training ground for the best business ideas. With precious clay, paint and a desire to bring their creative dreams to reality, Sherel and Shawnel are creating dream works rather than watch their dreams fall to pieces.