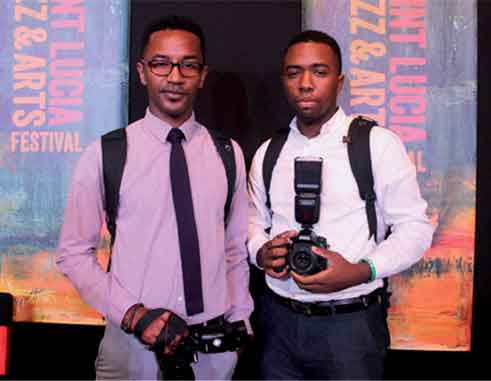 They say a picture is worth a thousand words. But for 30-year-old James Adjodha and 23-year-old Jesse Evans, what their thousands of pictures have done for them thus far leaves them speechless on many occasions.

These two young entrepreneurs are among the growing list of top quality Saint Lucian photographers shooting the images that make us take a second look.

Adjodha and Evans’ company, Wavemaker Photography, is currently riding a wave of success. Earlier this month, the Saint Lucia Tourist Board (SLTB) announced that the duo had been awarded a contract to be the official photographers for this year’s Saint Lucia Jazz & Arts Festival.

Both businessmen already have their regular day jobs: Adjodha works with his father’s surveillance company, OnWatch Caribbean and Evans is a roofing surveyor and sales representative at Lifetime Rooftops. But it’s their new labour of love –Wavemaker Photography – that seems to make them click even closer and faster.

The new major task the two young “wavemakers” are expected to undertake is no easy feat. For the past 24 years, the most seasoned photographers in the business have won the contracts to point their lenses at and capture the images of the region’s fast-growing music festival. But if you knew what successful formula Adjodha and Evans have been using thus far, you might understand just why they’re up for the challenge.

“Jesse and I have always had an interest in photography,” Adjodha tells me. “At first, it was limited to us just taking photos with our cell phones and uploading them to social media. Based on the responses we started to get, we decided that we should invest in some entry level DSLR cameras. From there, we decided to learn more photography techniques.”

Adjodha said the increased response from social media was what really helped the company propel itself to the point where he and Evans took the decision to get it registered. Last January, Wavemaker Photography became a registered company.

Adjodha and Evans grew up together and would often hang out together. They share a strong friendship, they say, which has lent itself beautifully for their current business partnership. The two men are among a growing trend in Saint Lucia that sees the faces of successful entrepreneurs becoming younger. That explains why Adjodha and Evans were stumped when they got word that they had won the coveted jazz contract.

“It was a huge surprise because there are a lot of veteran photographers out there whose work is consistent and who do really good work,” Adjodha explained. “The organizers could have continued to use these photographers whose work they would have seen over the years. So to use two young entrepreneurs for such an important aspect says something.”

As Adjodha tells it, most of the other features of the Saint Lucia Jazz & Arts Festival are done when the festival ends. But it’s the photos that the organizers are going to keep so that they can use them to promote the festival, the culture, the atmosphere, the artistes, and the island.

“So the fact that they’re using us to do that is amazing. The fact that they’ve put their faith in us, we are truly humbled to be able to be given that opportunity as young entrepreneurs,” Adjodha said.

Evans, on the other hand, didn’t take the good news lightly. But had a camera been there the moment he found out, that would have definitely made for a super photo moment.

“When James called me and told me we’d gotten the contract, it was an overwhelming feeling. I think I ran up the road a few times and did a few back flips. It was indeed a shocker. But for the organizers to entrust us with such a great responsibility is something we feel honoured about,” Evans said.

Wavemaker Photography recently teamed up with WeLime and DreamVision to produce singing sensation Michael Robinson’s latest music video, “Make You Mine”. Before that, they also did some camera work at a few local weddings, a niche they intend to capitalize on more aggressively.

“We definitely want to be more involved in wedding photography because Saint Lucia is a major destination when it comes to weddings. We’ve done quite a few weddings thus far. In fact, we’re actually flying to California in August to do our first overseas wedding. So that’s a big undertaking,” Adjodha explained.

For most of the festival, the duo will work out a schedule to see how they can cover everything. For the last three days – Main Stage Jazz – they’re going to have to work out something, they said. They’re also trying to do live uploads. Sometime in the past, there has been live uploads but on a higher level. That calls for reinforcement: extra hands and cameras.

“So we have a league of photographers at WeLime with whom we’re going to work out something so that we get it all covered. There are quite a lot of our photography friends who are happy to help us out in that regard,” Adjodha said.

Refusing to let the cat out of the bag, Adjodha said the Wavemaker Photography team has a few surprises up their sleeves. As much as they have been surprised by their success thus far, it seems we’re also in for some surprise from them. It seems like their photographic magic has no limits.

“We also have something else that hasn’t yet been done that we’re hopefully going to be implementing during the jazz festival. But you’re going to have to stay tuned to find out what it is,” Adjodha said.

Future Wavemaker Photography projects include starting a cinematic headshot project. Basically, it’s a photograph taken from the shoulders up that captures a person’s emotions. Not too much retouching but a great headshot that they can use, Evans told me.

As for advice to prospective and/or budding entrepreneurs, Adjodha said can be summed up in three key factors: believing, achieving and working hard. Anything can happen, he said, but the key to getting it done is getting it done.

“We started by uploading photos to social media. We had a love for it and it grew. We started from nothing and made it into something,” Adjodha said.

As for Evans, the back-flipper, in a sea of fishes, it’s always best to swim upstream and keep working on getting better at your craft.

“There are many photographers out there,” Evans said. “But the best thing to do is to try to be different. You need to stand out. Find your niche, master it and you’ll do well.”

Back in February, the Saint Lucia Tourist Board (SLTB) announced that 40% of the Saint Lucia Jazz & Arts Festival’s budget was being spent on-island as a direct injection into the local economy. Adjodha and Evans are demonstrating that they, too, can have a slice of that multi-million-dollar economic pie. Even better, with April designated as Youth Month, the two innovative backpacking entrepreneurs have definitely given Saint Lucian youth some measure of inspiration.