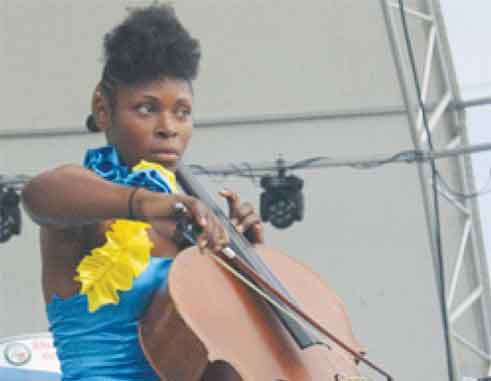 PEARL Tench is a musician on a mission. She might seem unassuming to many but her musical talents are unquestionably mind-blowing. Just give her a stage and she can do for your ears with her cello what Sir Dunstan St. Omer’s paintbrush does for your eyes.

The 29-year-old Bexon native was introduced to music during her last term in Form One at Corinth Secondary School. The music tutor at the time, Ms. Conway, gave the students a two-week period to prove themselves musically. Although eight musical instruments were available, sixteen students applied, eight of whom were chosen after auditions. Tench was among those shortlisted from the programme.

“At first, I started with the violin but by the second week the tutor asked me to try out the cello,” Tench tells me. “Since I was among those chosen, I had no choice in the matter, so I had to play the cello. So I spent about five years at Corinth Secondary School playing the cello.”

The group later moved their rehearsals to the Cultural Development Foundation (CDF) and towards the last years of Tench’s secondary school years began rehearsing at the St. Lucia School of Music.

After leaving secondary school, Tench applied to the Sir Arthur Lewis Community College (SALCC) despite having high hopes of furthering her musical dreams full-time. She admitted that even though music was not considered a wise career move at the time, she turned down the opportunity to attend SALCC in 2003 even though she was accepted. The backlash from her parents, friends and former schooldays friends, she said, came fast and furious. Nevertheless, she knew what she wanted.

“I always felt that had I gone to SALCC, I would have forgotten about music and that would be it for me. So I decided to give music a chance,” Tench explains.

She soon got a job teaching music at the St. Lucia School of Music but left there in 2004 after realizing that the pay was not enough. The pressure of pursuing her musical dreams and furthering her education intensified. She applied to SALCC again, was accepted again, but declined the offer yet again. She found herself playing a familiar song with her future until her uncle, Ambrose Adolph, a former cabaret singer, stepped in.

“He really encouraged and supported me by telling me to not give up,” says Tench, who says her love for music is what keeps her going. “After gaining a distinction in my Associated Board of the Royal Schools of Music (ABRSM) Grade Five practical exams, I had to perform at the school’s end of term concert. I didn’t do so well and was very frustrated.”

When her uncle called from England and asked how her performance went, she told him she didn’t feel her love affair with music was going anywhere. He told her to stay the course and that she did.

By 2006, Tench was at the Grade Seven practical level. Fate would intervene when her teacher left the school, leaving Tench without a teacher. Tench’s uncle had promised her that once she got to Grade Eight practical level for cello, he would send for her so that she could continue her studies in England. Despite her being a grade behind, he sent for her, anyway.

Tench enrolled in a two-year course at Christ Church University in Canterbury. Because of her prior high level of training in Saint Lucia, she was encouraged to fast-track her course and finish it in one year. After completing that course, she immediately applied for a degree programme but, due to financial constraints, could not accept the offer when she was accepted.

Upon returning to Saint Lucia, Tench began teaching music at Marigot Secondary School full-time while coordinating the Marchand Youth Orchestra after school. After a brief stint there, she began raising funds towards furthering her education. Things didn’t work out, though. She was caught in yet another dilemma.

“I decided that it was either I stuck to music or do something that would pay off,” Tench says. “So I decided that even if I can’t go back to school now, there’s no reason for me to not start living my dream. While it would be great getting additional professional qualification for what I’m doing, I still don’t see why I shouldn’t be happy with what I’m doing.”

In 2013, Tench founded the National String Orchestra (NSO) which involves her working with students from four centres: Camille Henry Memorial School, Corinth Secondary School, Seventh-Day Adventist Academy and Ave Maria Girls’ Primary. As part of the after-school programme, Tench and her small core of assistants teach the students music theory and practical for a reasonable fee.

Tench said that while the NSO programme has managed to attract some promising and talented students, sustaining the programme has become a major challenge as sourcing the requisite instruments such as violins, violas and cellos, all of which demand financing that is not available.

“I actually rent some of my instruments to the students for about a dollar a day. I’ve also given a few instruments to students who really cannot afford one. So they’re basically on scholarship,” Tench says, smilingly.

While pursuing higher education remains a priority, Tench said she enjoys passing on her musical skills to the students she teaches. Someday, she said, the big breaks and lucrative deals might materialize. But she’s not determined to let the chance of realizing her current dream be dampened by life’s “what-ifs”.

Tench has performed at weddings, hotels and even performed at Jazz on the Square alongside famed saxophonist Barbara Cadet about 10 years ago. She has also performed with guitarist/vocalist Ken Hardy and violinist Yannick James.

Last Independence Day, Tench lit up the big stage at Phillip Marcellin Ground in Vieux Fort where the celebratory rally was held. Early in the programme, she paid tribute in song to Governor-General Dame PearletteLouisy. Her self-penned song, “Encompassing Love”, received a huge applause from the thick crowd. She described it as one of the best experiences of her budding musical career.

The young musician said that inasmuch as her love for music runs deep, sustaining the NSO programme that gives others a chance at playing their songs requires the participation of those who can pitch in.

“We need the support from our people. If anyone has a violin, viola or cello lying around, they can donate it to the NSO. They can also sponsor a child,” Tench says.

For more information on the National String Orchestra programme, go to its Facebook page.