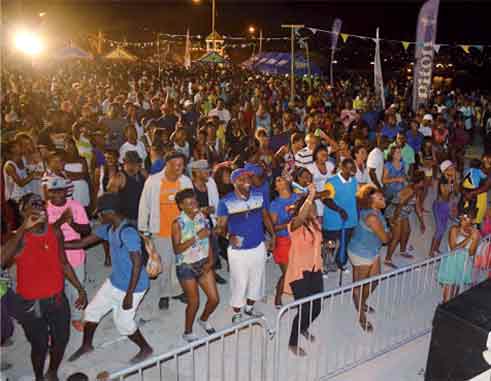 CREATIVE spaces were teaming with excitement this year as Saint Lucian artists prepared for the National Arts Festival (NAF); featuring creative Saint Lucians dedicated to sharing with their fellow country folk the true essence of beauty manifested through various genres of the arts.

Under the direction of the Cultural Development Foundation, activities engaged young and the young-at-heart from around the island. Together, they created an intricate tapestry made up of diverse threads interlaced to inspired perfection.

Community spirit diffused throughout Laborie on Sunday February 15, as the peaceful community welcomed visitors who came in great anticipation of the true Laborie experience. A two-day Southern Visual Arts Exhibition which took place at Le Papel and showcased a diverse selection of products ranging from hot sauce to costume jewellery, an undeniable testament of the skill and resourcefulness of Saint Lucians involved in the arts. The community festival included entertainment from masqueraders, stilt walkers, traditional drummers as well as dance and music performances of varying genres.

Pigeon Island Causeway was transformed into an arts village on February 23 when the CDF in collaboration with Piton hosted “Proud to be Saint Lucian”, dedicated to celebrating things that encourage pride in our country. The day’s activities included collage painting, portrait drawing, theatrical, dance, as well as poetry performances. Prizes for the most creative costume using national colours as well as a green fig and salt fish competition were highly talked about and sought after elements of the showcase. Ezra, de Fun machine, African Roots Band, Hollywood HP, Secret Band, Meshack, De Ashanti, among other regarded music artists took the stage and had the ever growing crowd begging for more.

An in-depth discourse on the “Importance of Arts and Culture to Social, Economic and Spiritual Development” took place on March 2, 3 and 5 at the Conference Room of the CDF with UWI Professor, Rawle Gibbons as the keynote speaker. Other presenters included Esther Matthew, teacher at the Vide Bouteille Secondary School who made an intriguing presentation on “Theatre: A Vehicle for Tangible Social Change”, an eye-opening plenary session conducted by architect Mark Hennecarte on “Belief and Meaning in Architecture – An Exploration of Human Diversity” and a thought-provoking and inspiring discussion with Kendal John and Collin Weekes based on “Film Tourism”.

In keeping with the Cultural Development Foundation’s mission to spearhead programmes that nurture cultural and artistic expression within the creative sector, a Master Class in Script Writing for Theatre and Film writers and directors was offered by the CDF during the National Arts Festival, facilitated by acclaimed playwright, Stephen Orlov.

Vibrant colours, varied forms and techniques as well as textures employed by visual artists were put on display from Thursday March 5 on the 2 floor of the Blue Coral Mall. Proudly exhibiting the work of Shirley Ann Edward, Ron Henry, Kristin Cozier, Johnathan Gladding, JharoamWelz, Donna Grandin, Daphne Stephen, Cedric George, Cecil Fevriere, Alexandra Grant and AlcinaNolley, among others, the public gallery provided a single space for the showcasing of over one hundred art pieces from nine classifications. This year, the exhibition specially featured the work of Gary Butte, whose unique style of painting reflects his profound ancestral connection. He has toured the Caribbean and exhibited his work in Mexico and the United Kingdom. Ten of his most recent pieces were featured including, “Ancestors”, “Star Gazing”, “Transition”, “Fertility” and “Riot in the City”.

Characters from Travis Weekes’ latest play leapt off the pages of his manuscript and danced onto the National Cultural Centre stage on Wednesday March 18 introducing a bright and promising cast from the Sir Arthur Lewis Community College. Their passionate and near flawless performance told the story of Eva and her boyfriend Mawon, a young couple from the village of Derrière Morne. Eva has a deep desire for a better life, which is promised in a land beyond their impoverished village. Mawon is content with their dreams of having a family and carving a life from what they were taught and what they’ve always known. Eva ventures out on her journey and encounters La Diablesse, partner of the Soucouyant, who holds the key to the Secret gate and Madame Sajès, half-sister to La Diablesse. They each try to convince Eva of what they consider to be the better path to her dreams: La Diablesse through a series of cosmetic manipulations and Madame Sajès through prayer to find her strength in the “Field Of Power”.

The prowess of artists in the area of dance was the highlight of Dance Exposé on March 21. Recognising the growing interest in Dance, particularly amongst young people, a series of workshops in technique and choreography were offered in Laborie and Castries and will run until June. Skills gained by participants were put on show, an indication of the dedication to self-development by dance practitioners.

The “word” is a key element of the arts and it is always prominently featured throughout the year especially during the National Arts Festival. This year, the Cultural Development Foundation brought together some of Saint Lucia’s most notable poets who read pieces from the latest totally “Saint Lucian” publication – “Sent Lisi – Poems and Art of Saint Lucia”. Poetry Live, was broadcast on the National Television Network on Wednesday March 25 with an in-studio audience which comprised Nobel Laureate, Derek Walcott, Charles Cadet, Florita Nicolas, JalimEudovic, Gary Butte, George Goddard and several other lovers of the arts. The audience was inspired by Jamaican Poet Laureate Mervyn Morris with readings of selected pieces followed by a discussion on “The Craft of Poetry”. The discussion on poetry was extended to students of the Sir Arthur Lewis Community College on March 26 when Mervyn Morris in an intimate setting shared writing techniques with literature students as well as students from the Teacher Training Division of the tertiary learning institution.

The Cultural Development Foundation wishes to thank lovers of the arts for their support over the years as well as the corporate community for their invaluable partnership as the organisation works towards encouraging the growth and development of the arts in Saint Lucia.

Over the next four weeks, CANELLES will publish reviews of the four segments of the festival: theatre, dance, poetry and visual arts.