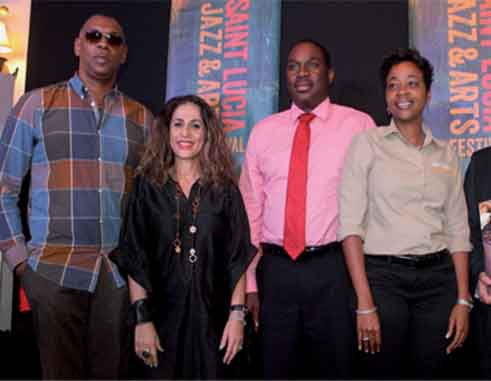 THE third annual fashion show, Hot Couture, is being billed as one that will provide more heat and fashion than its previous two showings.

The May 6 event, themed “Fashion for Freedom”, will begin its colourful strut from 7:00 p.m. at Johnsons Centre in Rodney Bay. The After Party will follow at The Pearl in the Rodney Bay Boatyard.

About 20 leading designers from Saint Lucia, Guadeloupe, Turkey, Trinidad, Guyana and Cuba will showcase their works at this year’s Hot Couture. The highlights at this year’s fashion show include “Project Runway” Season 9 Winner, Trinidad and Tobago’s Anya Ayoung-Chee, being guest designer and Cuban designers and models making their debut at the fastest-growing fashion forward stage in the Caribbean.

Co-producer, Mae Wayne, said her diverse ethnic background and social conscience inspired this year’s theme for the show and was coined during Saint Lucia’s Independence celebrations last February. She said this year’s show will convey that message in a strong and bold way.

“As my hundreds of photographs taken over different periods of my life journey (have shown), fashion has always played a very important (and) major role in my life,” Wayne said Tuesday. “The clothes I wore in those pictures reminded me of that particular time in history and how that history affected me personally…The truth is that we express ourselves via the language of fashion. Fashion is history. Fashion is freedom.”

Director of Tourism, Louis Lewis, said the Saint Lucia Tourist Board (SLTB) has this year given more control of the show to local event organizers, namely Wayne and Adrian Augier, who will produce the show. Lewis said requests for proposals were sent out this year and following a vetting process and critical review, discussions and negotiations with the SHE Magazine and Landmark Events teams were held. This year’s Hot Couture, he said, is not one to miss.

“What is interesting about it is that what we will be seeing is a reflection of fashion from the perspective of art,” Lewis said. “So it’s no longer just a display of beautiful garments which, of course, is an integral part. But you will be seeing it from the perspective of an art-form. That makes this event one of the signature components of the arts edition within the jazz and arts festival. So if you’ve never been to it or have seen it before, what you will be seeing this year is far different from what we have staged in the past.”

Casting Director, Denise Lay, said she was impressed with the high level of “passion, drive and desire of our models to excel in the sector”, noting that the fashion show serves to improve the quality and confidence of local talent. This year’s faces of Hot Couture, Cornelius George and Hermina Nestor, were introduced to the media. Lay said the investment in Hot Couture is an invaluable one.

“They return year after year obviously better and it makes me proud knowing that they’ve used what they’ve learned from the time invested in them at Hot Couture to hone their skills,” Lay said.

Cuban Ambassador to Saint Lucia, Jorge Francisco Soberon Luis, was also present when the lineup was announced. Cuban contingent, Art y Moda, will be featured at this year’s Hot Couture. The ambassador had high praise for the fashion show, adding that it creates a platform for fostering deeper cultural and friendly ties within the region.

“I think this is a show that is genuine, bold and creative. I welcome very much the opportunity of Cuba being part of the extraordinary Saint Lucia Jazz & Arts Festival. I do think that it’s a very important part of our friendship and our common place within the Caribbean to have these cultural and artistic exchanges,” Ambassador Luis said.

Augier, said Hot Couture’s successes thus far are an indication that the fashion show is in capable hands. He called on the festival’s key stakeholders to allow the festival to grow into something bigger by ensuring that the gains made are not lost in a single misstep.

“The thing is working, don’t mess with it,” Augier said. “I believe that there’s no other team that can bring this show to the quality and standard that has been achieved. I’m appealing to the decision-makers out there to please allow us to grow this show for the sake of the festival, the country and the fashion industry in Saint Lucia.”

He continued: “We’re not at the point where people are foregoing other fashion events. In just three years, this thing has built on international standards. You just have to go online and look at the pictures from (last year’s show) and you would think that you were in Milan or Paris or New York. We can do it, we are doing it, (and) we have done it. Please allow us to continue.”