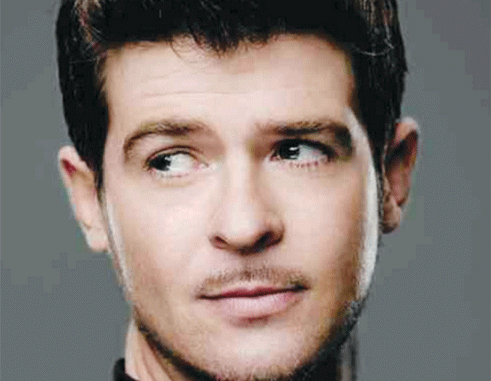 “THE show will go on”. This is according to the Press Relations Manager of the St. Lucia Tourist Board, John Emmanuel reacting to the recent lawsuit brought up against one of the headliners of this year’s St. Lucia Jazz and Arts Festival.

Robin Thicke who sang the smash hit “Blurred Lines” featuring Pharrell Williams and T.I. in 2013 and is due to perform at this year’s festival was slapped with a lawsuit by the family of the late Marvin Gaye following claims that Thicke used key elements of Gaye’s 1977 song “Got To Give It Up” without their consent.

Thicke alongside Williams, who was the other songwriter for the 2013 hit, lost the case earlier this week and were ordered to pay $7.4 million to the Gayes.

Emmanuel told The VOICE that regardless of the verdict, the show will go on as such situations often occur in the entertainment industry. He said: “This is show business, this is what it’s about”.

He added: “Whether they win or lose, that doesn’t change the price of coffee…Robin Thicke will perform”.

The SLTB PR Manager said this is not the first time that the Board has had to face such hiccups and mentioned the worries surrounding headliners P Square at last year’s festival when there was speculation about the twins not performing following growing tensions between themselves were rife.

Emmanuel said: “We’ve always delivered, we are known for delivering and we will deliver and as I say, the nuances that go with the entertainment business, you can get around and we will continue to deal with these things as they become a factor here or there”.

Thicke and Williams have released a statement saying that they intend to appeal the court’s decision.