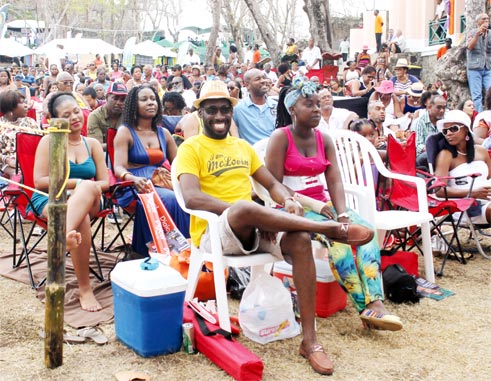 WITH just six weeks to go before the beginning of this year’s Saint Lucia Jazz & Arts Festival, organizers seem to be sparing no effort in their quest to replicate last year’s successes.

Director of Tourism, Louis Lewis, told The VOICE the Saint Lucia Tourist Board (SLTB) is now close to finalizing all production aspects of the music festival. A lot of work is being done behind the scenes, he said, and so far such efforts have been “very encouraging”.

“We’ve had most of the activities that we should have had covered by now completed,” Lewis said. “So we’re looking forward to putting on an excellent event this year. What I’m particularly excited about is the infusion of the arts. Every year, we keep building it and it keeps getting stronger. But I still think we’re far from where we’d like it to be in an ideal world.”

Lewis said the festival has made some significant strides over the years. This year, an arts village will be set up in Rodney Bay where there will be a continuous display of items. The village, he said, will act as a magnet both for people who are coming for the 11-day music festival as well as those just passing through.

Commenting on the challenges associated with the festival, Lewis said that booking artistes who are available and are within an affordable price range remains a crucial factor. Since November, he said, organizers have been able to secure an impressive line-up for this year’s April 30 to May 10 festival. The annual tedious process of negotiating between 300 and 350 contracts also remains, he said.

Tourism arrivals for the year thus far have been impressive. Lewis hopes that those impressive numbers will continue and have an even greater economic impact on the festival. This year, SLTB is also launching the Saint Lucia Jazz & Arts Festival in the regional and international markets to ramp up interest in the event. About a month ago, a launch was held in Trinidad, one of Saint Lucia’s major regional source markets. Similar launches in Barbados and Martinique are also planned.

“We’ll also be doing specific promotions in the U.S. and the U.K. and work closely with the Diaspora as well in a broader programme for promoting Saint Lucia,” Lewis said.

Tourist Board officials are also hoping to capitalize on the French market by working closely with operators such as L’Express des Iles to ensure accessibility to Saint Lucia during the festival. Lewis said one of the challenges faced last year was there was no boat leaving Saint Lucia the day after the festival ended. That created difficulties for people who had come here for the weekend and wanted to return to work on Monday. This year, he said, that inconvenience should not be an issue as officials are also speaking with the airlines.

“I’m very thankful that we have LIAT on board with us as a sponsor this year. We’re trying to get some creative and innovative ways to get proper pricing and scheduling for those people from the regional destinations to come to the festival. So we’re trying to ensure that Saint Lucia is accessible, the means are available, the accommodations are there and the attractiveness of festival artistes is present. So it’s all about getting all four of these things to work in tandem,” Lewis said.

As for plans for next year’s milestone, Lewis said the main idea each year is to make the festival new and innovative. Nevertheless, plans for the 2016 festival are “very exciting” to the extent that organizers had to be careful about jumping the gun this year.

“We’ve had to hold back on some of the initiatives this year to ensure that the 25th year would really be a festival of significance and one that truly stands out. That doesn’t mean that this year’s festival is going to be any less important than in previous years. It’s going to be great this year and I think everybody will enjoy themselves,” Lewis explained.

Due to venue issues, Lewis said the straight-ahead jazz event — the Jazz Showcase — that was traditionally held at Gaiety on the Thursday before the last weekend of the festival, will be held at the National Cultural Centre. He is encouraging festival lovers to come out in large numbers and be a part of the free shows and signature events at Pigeon Island National Landmark and other venues.

“Some exciting new things will also come out of the Hot Couture fashion show. We have expanded on the infusion of the arts. So I think it will make for a very attractive, entertaining and enjoyable festival this year,” Lewis said.