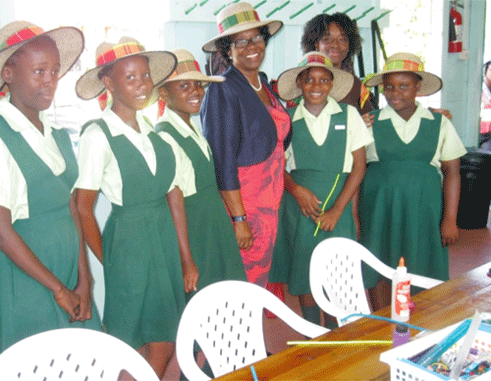 GOVERNOR GENERAL Dame Pearlette Louisy last week paid a visit to the Grow Well Centre in Gros Islet to the delight of children and volunteers alike.

This year Grow Well celebrates its 20th anniversary of service to the Gros Islet community. At the Centre, officials briefed the Governor General on Grow Well’s many after-school activities for under-served youth and on the upcoming Young Authors Competition.

President Paul Lorde, Vice President Colleen Newman and Trustee Jonathan Everett introduced volunteer programme leaders and their young charges many of whom had questions for their entertained Head of State.

The Young Authors Competition invites children under 18 who attend primary and secondary school in Gros Islet or belong to the Grow Well Library to write a short story on a theme based on Grow Well’s 20th anniversary motto: caring, sharing, volunteering and helping others.

The competition honours DamePearletteLouisy for her love of country and devotion to education. Entry forms are available at school offices, and at the Grow Well Centre in Gros Islet.

For this 20th anniversary, Grow Well sponsors and supporters have gone all out and have been extremely generous with prizes including nine Kindle Fire HD tablets, books by St. Lucian authors, e-book certificates and many other exciting gifts and books. The competition closes March 17 and a grand award ceremony is planned for March 25 at the Gros Islet Secondary School in Beausejour.