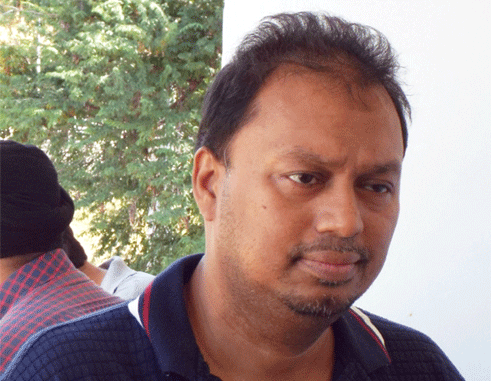 THE four Bangladeshi men accused of money laundering and human trafficking among other charges in relation to the Lambirds Academy scandal appeared in court in Gros Islet yesterday and pleaded not guilty. The matter was adjourned to April 10.

The President and CEO of the Academy, Doctor Iftekhar Shams went against the advice of his attorney and spoke to the media declaring the innocence of himself and the other three men being accused, KoushalChadasama, Ashwin Patel and GurjeetVilkhu.

He said he was confident the he and his colleagues would be exonerated because there was nothing illegal about his affairs in St. Lucia.

Speaking on the money laundering charges, mainly the disappearance of over US$700,000 from a Nova Scotia bank account, Shams said: “It was transferred from this academy to our U.S. Academy. It was our commitment to the students that we would complete our academy by the end of this year”.

With regard to the stranded students, Shams said the blame should be aimed at authorities who prevented the students from attending classes and this he said was wrongfully done since all legalities on their part were taken care of.

The Lambirds President said that the students who are mainly Indian and Nepalese came to St. Lucia under no false pretences and that they were well informed of the conditions of their schooling and work placements.

He said this clearly wasn’t a case of human trafficking: “The immigration and passport officers gave them their VISAS and they came here legally”.

The VOICE spoke to one of the 28 students staying at the Pastoral Centre in Marisule, where they sought refuge after the scandal broke.

The emotional Nepalese, who requested anonymity stated categorically that Doctor Shams’ words were all lies.

He said, back in their native countries they were lured with lies and false promises of boarding, housing, education and job placements. They were promised an easy gateway to employment in the U.S.

That, he said, was not the case: “When we came here, it was all different. We are facing a very difficult situation here. After we saw the college for the first time, it was just one store room, one flat with two classes”.

The student said presently, they have no money and are receiving help from the St Lucia government which is providing them with food and basic needs. The student said this has definitely been a case of human trafficking.

Since coming to St. Lucia one month ago, the student said he has paid over US $8,000 for school tuition and cost of living. The money accumulated was borrowed money by their family members and also money generated through re-mortgaging their family homes in order to secure their placements in the school.

Whilst he said the treatment at the Pastoral Centre has been good, he would like nothing more than to get his money back and return to his country. Going back empty handed though is not an option, he said.

The student said his fellow students have and are falling ill as a result of stress and depression. “Everyone has high pressure and is tense. Everyone is full of tension and some are crying but it’s very hard for us. Even when we talk to our parents, they cry too because they sent their children down here just to live their lives for themselves and to do some work without dependence but it’s now very hard for us”.

The lawyer of the accused men, Leslie Mondesir has expressed his confidence in his clients’ innocence.