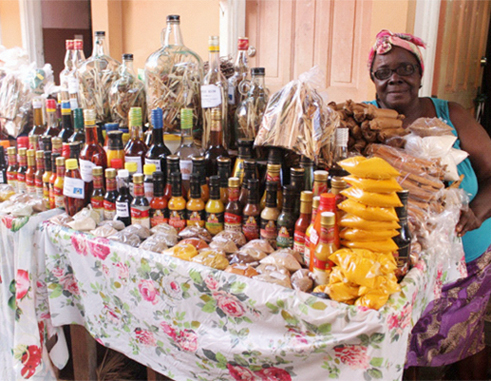 IF you think that starting a business is tough, then you probably haven’t tried keeping one going for a lengthy period of time.

Castries Market vendor Florita Pierre knows all too well the struggles a small business owner has to endure just to eke out a decent living.

Pierre, who lives in Aux Lyons, Dennery, says she was introduced to the market scene nearly 25 years ago when she accompanied her mother who sold charcoal at the Castries Market. After doing so for about three years, she opened her own business there selling cassava, farine and yams. She later gravitated to selling spices, condiments and other food items. Her business entails buying most of her goods locally at wholesale prices and reselling them in smaller portions.

Inasmuch as she enjoys being her own boss, Pierre says the ups and downs of staying in business are challenging. Nevertheless, having benefitted greatly from her trade over the years has been the balance that helped her roll with the punches.

Pierre says she has many customers, many of them long-time customers, who still pass by to get a little bit of this and that from time to time. The tourists, she says, purchase many of her items especially when the cruise season is in full swing. Sales also peak around Christmas, JounenKwéyòl, carnival and other holidays.

For 25 years now, standing on the breadline has not been the case for Pierre. She seems determined to keep it that way, too. She jealously guards against being complacent, she says, and laments the carefree attitude that many people – employed and unemployed – bring to the workplace.

“I depend on this business because my husband is not working and I don’t have any other job. This is my work. I think that some of the people who complain about not having a job don’t really want to work. You would help them get work and they would still not take it,” Pierre explains.

Reinforcing her previous point, she adds: “You have to look for work. However, when you get it, you have to take your work seriously. Don’t play. Some people want to show up for work at whatever time they please. If you’re supposed to be at work for 7 o’clock, then be there for 7 o’clock.”

Pierre can afford to give advice to others, having followed a strict protocol for years now. She gets to the Castries Market to open shop just before 7:00 a.m. each day. This means, she says, that she has to get up at 3:00 a.m. and leave home at 5:00 a.m. After a long day at the market, she returns home around 7:00 p.m. She travels from Aux Lyons to Castries and back six days a week!

If ever you’re looking for a little something to spice up that next Sunday lunch, be sure to check out Pierre at the Castries Market. Her warm customer service might just be the essence of your visit. You might also get some much-needed advice about how longevity in business can trigger a determination to succeed. Moreover, she might have some interesting recipes. Who knows?