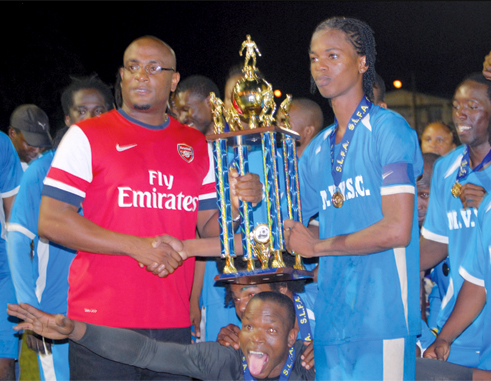 The match was played before a vocal crowd of supporters. Adding an extra favour to the already electrifying atmosphere was a four man rhythm section that keep the crowd that included his counterpart parliamentary representative for Soufriere Harold Dalsonand for Denney North Shawn Edward entertained.

On the field of play the boys from Mabouya Valley had a 4 – 3 win over Soufriere after leading 2 – 1 at half time.

The second saw both teams stepping up the tempo a few notches despite the muddy outfield. The goal scores for Mabouya Valley No. 8 Vernon Abbott with two and one each for Darren Edole and Jason Jn Louis. For Soufriere the goal scores were Troy Simon, Eden Charlery and Curtis Nicholas.

Sponsored
In the third place play off Canaries breezed past Mon Repos 4 – 1.The half time score 1 – 1. The goal scores for Canaries No.14 David Henry in the 7th minute, No.2 Bradley Tisson 52nd minute, Titus Shepherd 82nd minute and No.7 Robert Regis 86 minute (penalty kick). For Mon Repos No.10 Sylvester Stephen in the 44 minute was the lone goal scorer.