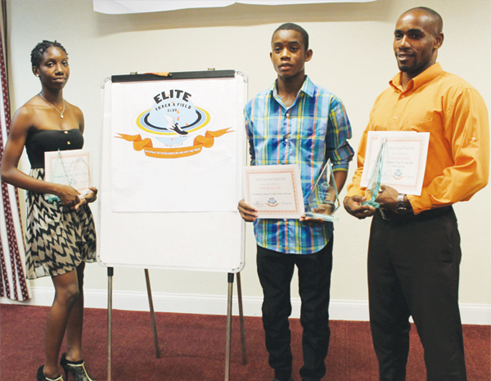 THE Elite Track and Field Club held its annual sports awards at the Bay Garden Resort last Sunday. The highlight of the evening saw St. Lucia’s gold medallist Neema Leon in the high jump event at the Windward Island School Games held walking away with the junior female “Athlete of the Year”, and the unveiling of the club’s logo.

The evening also saw the young members of the club take charge of the programme from Master of Ceremonies to theatre. The club president delivered her annual address, while Dr. Kenneth Louisy gave the feature address.

In awards presented for the year Leon received the VictrixLudorum award in her division at St. Joseph’s Convent having won the 100m,200m, long jump and high jump at the school’s inter house meet. At the Inter-school Championships she placed second in the high jump, won the long jump, placed 4th in the 200 mand ran on her school’s winning 4 x100 and 4 x400m relay teams.

At the 14 and Under Championships, Leon won the long jump and high jump and placed 2nd in the 300m. Her run of form continued at the national level when she set a new 14 and under record in the long jump with a jump of 5.42m, breaking her own record. She was a member of the CARIFTA team in Martinique participating in the long jump placing 9th, just missing the finals, and the 4 x 400m relay helping to set a new junior national record in that event. At the Windward Island School Games, Leon won the high jump with a new personal best of 1.66m, placed 5th in the long jump, 7th in the 400m after being asked to run it on the day and ran on the 4 x 400m relay team.

Leon also walked away with the “Most Improved Athlete” and 14 and under record holder awards.

For the second straight year the junior male “Athlete of the Year” went to Randy Serville, who won the 200, 400 and 800m races at his inter-house meet and also placed second in his school’s road race. At the inter-schools meet he won the 800m and placed second in the 400m. At the inaugural Elite Invitational meet he won the 400 and 800m events. He achieved personal best times in the 400m and 800m improving by three seconds and six seconds respectively. He was also a leading member of the club’s relay teams.

In the senior category Albert Reynolds for the second year running copped the “Athlete of the Year” award for 2014; Reynolds was undefeated at home in his event, the javelin. He won the javelin at the Independence Games and National Championships, placed 2nd at a meet in Martinique, 3rd at the Organization of Eastern Caribbean States Championships, 13th at the Commonwealth Games and 10th at the Pasco Games in Mexico. Throughout the season he only threw under 65 metres once.

Other awards on the night went to Aviona Edmund “Most Improved Athlete”. For their consistent attendance at training sessions the following athletes were recognized as they epitomized due diligence, commitment and a great sense of pride in their sport. Gibba Edward, Jaeda Emmanuel and Maggie Henry.

Recognized for of making the 2014 national team to the Windward Islands Secondary School games and CARIFTA Teams respectively were Neema Leon and Daisy-Mae Britney Benjamin. There was yet another bright spot on when Nyrick Joseph walked away with the Leadership award.

Elite Track and Field also recognized six parents who take time off to not only see their children participate, but who actually play their role in ensuring that the activities of the club run smoothly for the benefit of all. The six: Maria Desir, Verlina Joseph, Kiwana Leon, Brenda Portland Reynolds, Andre Edward and Jonathan Emmanuel.

Meanwhile, for their outstanding contribution, commitment and dedication three coaches were recognized in the persons of Dr.VernettaLesporis, Jonathan Emmanuel and Gregory Lubin.