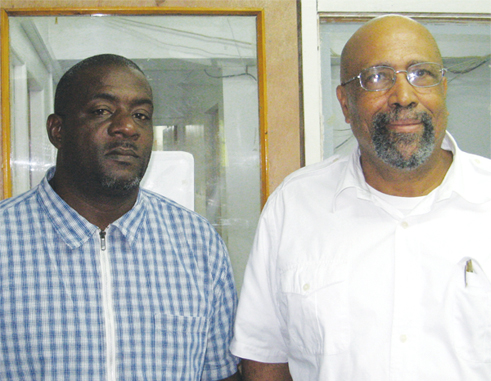 THREE men from Bouton, quarter of Soufriere, are on a mission to get the Catholic Church to right a wrong they say was committed in 1996 in claiming for itself a portion of land in the community contrary to the intentions of the owner.

The men say that they are determined in their quest for “justice”, and are not going to rest until the Church does what is right and returns the land to those it was intended for.

They started their hunt for fairness eight years ago, which was about the time the last will and testament of Charles Hippolyte Boucher, a merchant and proprietor of Castries came to their attention. They say that their determination grew after they read the will and sought and received legal interpretations of that document.

Joseph Cadette, Jason Auguste and Colin Mercier are the three men attempting to get the Catholic Church to abide by Boucher’s intentions as outlined in his will.

They say that their efforts at bringing the matter to the attention of the Church, namely the Archbishop, and having him to talk the matter over with them were foiled many times. They showed two letters from attorneys for the Archdiocese of Castries, dated 10 and 12 August, 2006 stating that the Church would not relinquish the lands in question.

The August 12, 2006 letter made it clear that the Archdiocese of Castries “is not willing to entertain any request for such a transfer of portion of the relevant lands, but is however amenable to discussing ways to further enhance and utilize the land for the benefit of the community as a whole.”

The three men are not the only ones who have knowledge of the contents of the will, copies of which were distributed in 2006 to those who now dwell on the land. There is now tension between the Catholic Church and those land dwellers, all of whom have been living on the land for many, many years.

The fight is over four lines in Boucher’s last will and testament which go like this: “I give and bequeath my properties – cash, real estate and possessions- as follows: 50 carres of land, more or less, at AnseJambon, quarter of Soufriere to the Parish Priest, for the time being, of Cana-ries, for the uses of the Parish – the poorest in the land.”

There are other persons and another Parish Priest, this one from Castries, named in the will, which clearly identified what each person should get on Boucher’s death.

Boucher died on 17th February, 1946. His last will and testament was written in Castries on 4th January, 1944.

“We want everyone to understand where we stand on this matter. We are not engaging in an out and out attack on the Catholic Church. That is not our intention. We have nothing against the Church. We are not into this for popularity, neither to attain wealth for ourselves. All we want is for the Church to right the wrong it did and return the land to the parishioners as stated in Boucher’s last will and testament,” Cadette said.

A search of the land registry in Castries revealed that on 19th August, 1987 Alix De Brette, a beneficiary of Boucher’s last will and testament and Emmanuel Devaux were the names listed as the proprietors of the land.

Those names have been crossed out. The new proprietors are now the Roman Catholic Archbishop of Castries, c/o Reverend Kelvin Edward Felix. The entry date of this new proprietor of the land is 7th March, 1996.

Said Cadette: “It is clear from Boucher’s last will and testament that he did not hand over the land to the Catholic Church to become a property of the Church for ever and ever. The parish priest at the time was the one given the task to put the land in use for the parish, meaning the parishioners, the poorest of the poor. They are the ones who had been living on the land at the time. The priest’s job was only for a time, as outlined in Boucher’s last will and testament.

“The Church rents the land to those living on it. The Church also sold a portion of the land even before it moved to have the land registered in its name. The Church had no right to sell any part of the land, and did so prior to getting title to the land.”

The task trio said that they have undertaken is to see that the entry in the land registry giving title of the land to the Roman Catholic Archbishop of Castries is changed. “We want that replaced. The real proprietors of the land are the people of Bouton. That is what we want to see reflected in the land registry on parcel number 0034B 46,” the men said.

The approximate area of land now in contention is 45.20 hectares.

The VOICE has since learned that parishioners stopped paying rent to the Church after learning in 2006 that it had no entitlement to the land, according to Boucher’s last will.

Archbishop Robert Rivas, when contacted by The VOICE said that he was not prepared to deal with the matter at this time, noting that this was before his time as head of the Church in Saint Lucia. However, he directed this reporter to the Church’s attorneys saying that the matter was now in their hands.

“The matter is settled as far as we are concerned but since they brought it up we have to give it some attention. We have asked for legal advice,” he said.