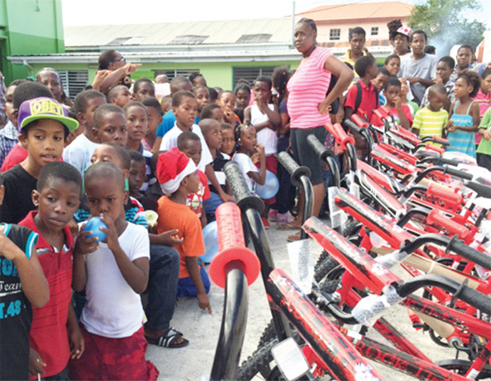 ON Wednesday, Christmas Eve, Boka Group delivered the last of its festive food hampers to residents in the areas of Canaries, Belvedere and Anse La Verdure, all adjoining its Belvedere Plantation at Mahaut Estate near Canaries.

The Company celebrated the fact that this year almost 100 bundles were prepared and distributed for those who would most benefit from a little Christmas cheer. The hampers included some core essentials, such as rice, flour, oil, tuna, various soaps, corned beef and some sanitary items.

Boka Group Founder and CEO John Kennedy, who personally joined the distribution teams, taking hampers out to more remote residents, has thanked volunteers from the Canaries Village Council and their councillors who assisted with the distribution and announced an expansion of the programme for next year.

He said: “Getting out and about amongst our neighbouring community has enlightened us to a number of important facts, one of which has led to us taking the decision to expand the programme to include larger families and those families with multiple pre-teenage children in next year’s gifting. Concentration has always been given to the elderly and those in reduced circumstances. This of course will continue – but large families who may not fit into this category may still benefit from a little Christmas cheer and a little extra for the table in the next round, a year from now.

“We now have a new target of increasing the number of hampers distributed in the years ahead”.

Boka Group’s Social Corporate Responsibility Team have already started work on encouraging other larger corporations to support their 2015 programme by pledging non-perishable items to be included in the expanded 2015 Hamper Scheme.

The SCR Coordinator for Boka Group, Mr Shaun Alcindor said, “We have contacts with those who can donate but who do not have the resources to coordinate a hamper programme. Our first task is to get them to commit gifts for the 2015 round so we can increase the volume of hampers available. We want 2014 to be a happy Christmas and 2015 to be even happier still”.

Next year Boka is aiming to hit its target of 300 hampers, which would represent a hamper for around 25 percent of the households in the community.