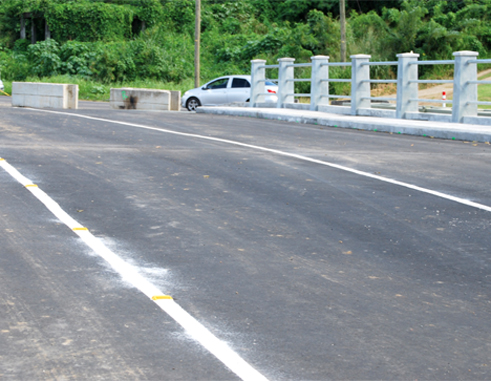 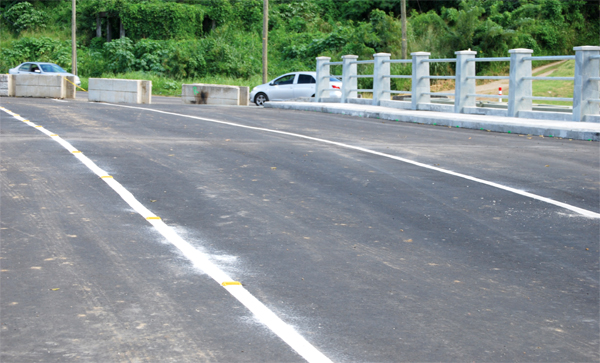 THE newly-constructed Bois d’Orange Bridge was officially opened to motorists Tuesday evening following a short ceremony held there by the ministry of Infrastructure and other officials to outline its history and present advantages.

While the bridge comprises four lanes, only the two inner lanes are open to motorists in the interim. Moreover, the relief bypass road adjacent to the bridge has been closed to motorists.

The bridge, which replaced the former twentysomething-year-old structure that was battered by Hurricane Tomas in October 2010, is an 18-metre single-span composite steel and concrete structure and is supported by reinforced concrete piles. Built with weathered steel, the bridge has the capability of lasting over 100 years, making it very resilient to the natural elements, ministry officials say.

Permanent Secretary in the Ministry of Infrastructure, Alison Gajadhar, said the processes involved during procurement, management and supervision of the bridge “epitomize the level of transparency and accountability that all citizens should be demanding from public officers”.

Gajadhar added that her ministry is now in the process of preparing to access over US$50 million in funding from the World Bank to repair broken infrastructure island-wide and to also build the capacity within that ministry to manage and maintain the public’s assets in the future.

Chief Engineer, Albert Jn. Baptiste, said the new bridge became relevant since the growing population and business activity in the island’s north over the past 20 years have resulted in increased demand on the bridge. Jn. Baptiste said an average 22,000 vehicles traversed the bridge on a daily basis. He added that based on the 2010 Census Gros Islet had the highest population on the island: 25,210, second to Castries which has 65,656 households.

“The significance of the Bois d’Orange Bridge is also underscored by the sheer number of people who commute between Castries and Gros Islet for education, work, recreation, worship, entertainment and commerce being the principal reasons,” Jn. Baptiste said.

Minister for Infrastructure, Port Services and Transport, Philip J. Pierre, said the new bridge was constructed at a cost of $11.2 million ($9.7 million before Valued Added Tax). Pierre said that in the past three years government had completed and repaired at least 17 bridges island-wide. He added that “the execution of such a complex project within budget was deserving of praise” and that more bridge and road works are in the ministry’s plans for next year.

“The restoration task of our infrastructure continues,” Pierre said. “As a government and as a ministry, we’ve had to secure and dedicate scarce resources towards these redevelopment efforts. We have demonstrated the highest level of frugality and prioritization while simultaneously not compromising quality and the useful life of our public assets.”

Prime Minister Dr. Kenny Anthony, like other officials, expressed gratitude to homeowners and businesses in the area as well as motorists for the patience they showed during the bridge’s construction. However, he indicated that more disruption is on the way as the expansion of the highway from Choc Bridge to Gros Islet is scheduled to commence soon. Dr. Anthony said government recently procured a loan from the Kuwaiti Fund for that project for which construction is supposed to last for a few months. He also indicated that reconstruction of the Choc Bridge now in the planning stage and will be financed by the World Bank.

The Prime Minister said that over the past decade or so, government has had to undertake very costly reconstruction works following the passage of destructive natural disasters. This, he said, has forced government to channel much-needed finances earmarked for other purposes into rebuilding efforts. He warned against quick fixes which, he said, has resulted in government’s resources being sapped.

“All the problems we have met as a result of those systems, we have been systematically dealing with those problems. But there’s a lesson, too, that we must learn. We have a passion in this country for quick fixes. We like the easy way out. We want the quickest solution in the shortest possible time. We are now paying a price for that approach – a big price,” Dr. Anthony said.

Over the past year or so, the bridge’s construction has been a focus of controversy between the ruling Saint Lucia Labour Party (SLP) and the opposition United Workers Party (UWP) regarding the costing. While the UWP expressed concerns about the bridge being too pricey given the government’s current limited finance levels, the SLP government has said that the project’s sound design and building standards justify the cost.