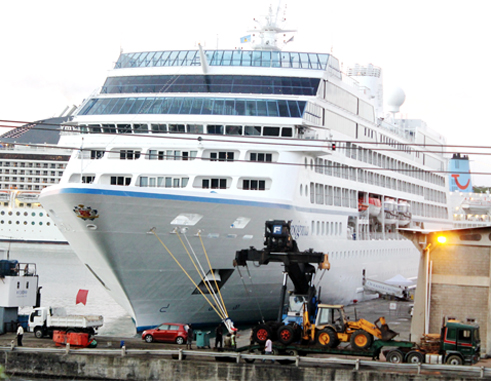 THREE male crew members on the cruise ship INSIGNIA died here Thursday after a fire on board the vessel which was berthed in the Castries harbour.

A fourth crew member, a 42 year old male, was being kept overnight for observation at Victoria Hospital.

News of the deaths on board was only broken late Thursday afternoon during a press conference called by SLASPA. And journalists attending the conference appeared to have been taken by surprise when the announcement of the deaths was made, by a Ministry of Health official.

An earlier “joint press release” between SLASPA and the St Lucia Fire Services had given absolutely no indication of the seriousness of the fire on board the INSIGNIA or that there had been loss of life.

It said simply that there was “an evolving situation” and both parties were gathering “as much information as possible”. However, it confirmed that at about 9.10 in the morning a fire started in the engine room on the INSIGNIA which was at Berth Number 5.

Said the statement: “We have a procedure in place for such an emergency. The situation is under control and we are working with local authorities, ship and local agent.”

At Thursday’s press conference SLASPA did not divulge either the names of the dead or their nationalities. No one from the ship was on hand to speak about the incident. The ship’s local agents, Cox and Company was represented by CEO Matthew Beaubrun who declined to answer questions or furnish details about the fire.

Keigan Cox, General Manager of SLASPA said that the fire was not the result of any port operation, an indication that it originated on the ship.

The INSIGNIA was carrying 650 passengers and 400 crew and arrived earlier in the day from Barbados with St Vincent as its next port of call. A marine expert at SLASPA indicated that there were 25 trained fire responders on the ship.

It is not known how long the fire raged, however it was reported that crew members contained it, although fire appliances from St Lucia were on standby. Local personnel also assisted in search and rescue operations.

Deputy Chief Fire Officer Lambert Charles said his department received a call about the fire at 9.25 in the morning. This came after members of the public saw smoke coming out of the ship and called SLASPA, Kennedy Francis, chief of the ports police said.

Charles said that both police and firemen were investigating the incident.

It is not known exactly how the three crew members met their deaths. Doctors called to the scene declined to give details about the conditions of the bodies.