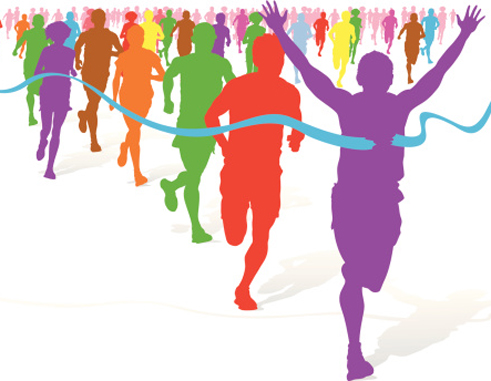 APPROXIMATELY 240 students from the Dame Pearlette Primary School on Thursday participated in their annual Road Race which commenced just outside the Corinth Secondary School. From there the runners journeyed along the Grande Riviere Road, then down the Degazon and Elwin Road to end at the school.

The event was graced with the presence of West Indies T20 Captain Darren Sammy who accompanied and lend support to the students along the way on foot, culminating with him guiding most of the runners to the finish line. In addition a number of parents ran the route.

Also in attendance was the Minister for Youth Development and Sport Shawn Edward and members of the Ministry’s Communication Unit.

At the end of the Race, Shaquwayne Prudent from Visioners was the overall winner in a time of 17 minutes 29 seconds; he was followed by Naya Mathews also of Visioners in 17 minutes. 34 seconds, with Brandon Ferguson of Achievers coming in third in a time of 18 minutes 36 seconds.

Meanwhile District One will be holding their Inter Primary Schools Road Race on Wednesday using the same route.