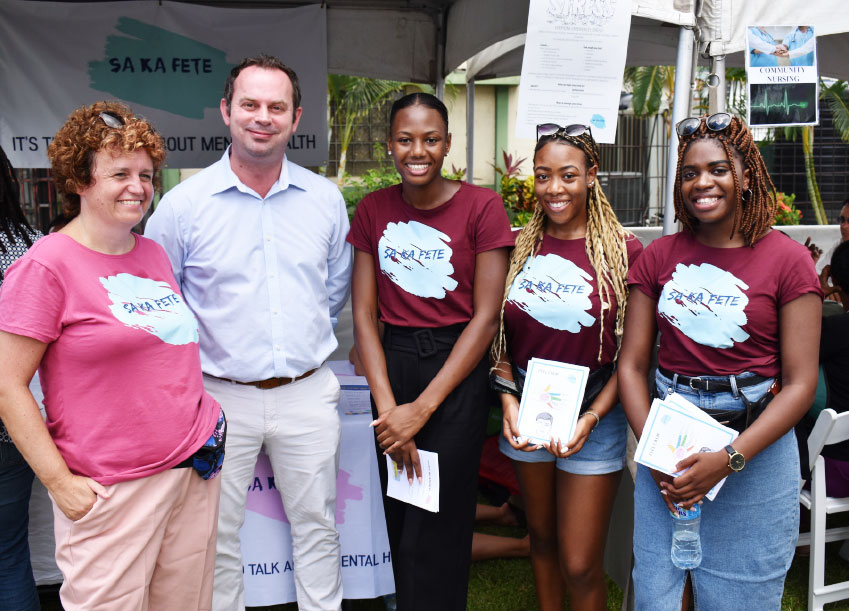 IT is Health Awareness Month in Saint Lucia and to mark the occasion, representatives from Community Health, local pharmacies, Massy Stores, health conscious groups, and psychology students from the UK were all gathered at Constitution Park on Friday, September 13th to share their knowledge with the general public. Nurses from Community Health were busy checking the pressure and blood sugar levels of persons who came out in support of health awareness month. They were also actively engaged in giving health tips to their many visitors.

Pharmaceutical representatives made themselves available for discussions with members of the public on matters of medicine and overall health. A group of psychology students from the UK also had a tent at the park, under which they shared with members of the public, their knowledge on mental health issues. Harry Spear, the group’s director stated, “We are passionate about mental health and we believe that it is an issue here which needs to be talked about; so we’re here with a group of psychology students from the UK.” The group members, who are hoping to start a conversation about mental health, wore t-shirts bearing the slogan “SA KA FETE” which translates to “How are you”, which is the group’s way of initiating a conversation about mental health. Exactly one week ago, Rise Director, Stephen King, spoke with local media on the awareness of mental health.

The group’s director said they were also participating in activities for Suicide Prevention Month. On the issues of mental health and suicide in Saint Lucia, he said, “Just by starting to talk about it a little bit more and admitting that maybe you need to talk to other people about your health is the very first step. That is what we’re trying to encourage by what we’re doing.” He said that the group will be spending time with students at the local schools to educate them on dealing with the stress which they encounter in their young lives. The students were also accompanied by Liz Sharpe, a psychotherapist from the UK with twenty-two years of experience in the profession.

Steve McCready, British High Commissioner for Saint Lucia was also present to meet with the various health awareness groups at Constitution Park. Representatives of Massy Stores introduced attendees to healthy food choices. On Massy’s display table were various organic food items which contained neither added preservatives nor artificial flavouring. There were also gluten-free products, diary-free products, and low-sugar, low-salt and low-sodium products on display. Dania Joseph, from Massy Stores was very articulate in introducing the public to these healthy food choices. In all, the event was a culmination of overall health awareness.