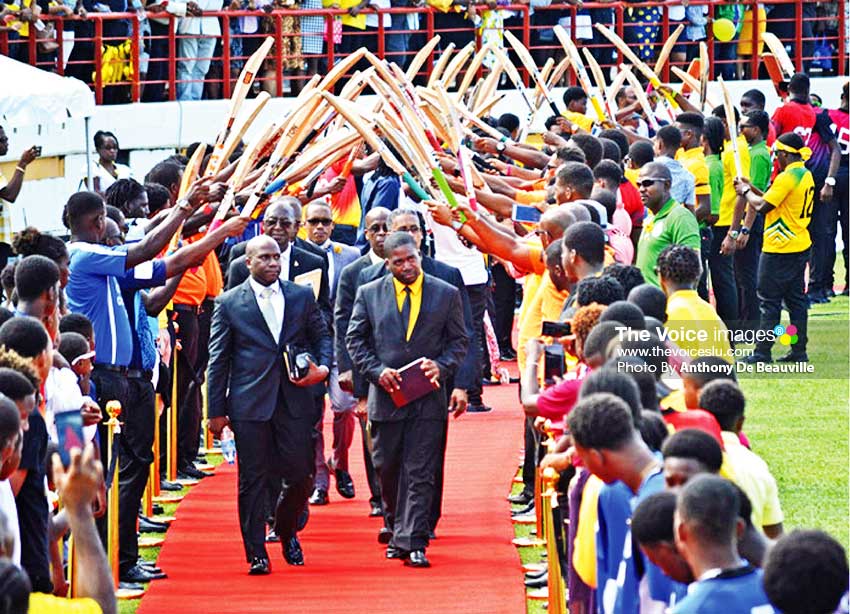 IN steaming temperatures of nearly 32 degrees Celsius early arrivals to the funeral service for youth cricketer Dhan Raj Chaz Cepal turned the atmosphere into a celebration of his life on Sunday 8th September at the Daren Sammy Cricket Ground (DSCG) despite the grief and sorrow still evident from his death.

At one point persons fanned themselves with leaflets, those who wore sports jackets and blazers had taken them off, and some with long sleeves had rolled them up to their elbows.

Among the dignitaries who came to pay their last respect to a young man that touched many lives was acting Prime Minister Guy Joseph, Minister for Education Dr. Gale Rigobert, Minister for National Security Hermangild Francis, former Youth and Sports Minister Shawn Edward, Faculty of the Seventh Day Academy and the Sir Arthur Lewis Community College, members of the Seventh Day Adventist churches, Flow Lancers FC, the many cricket teams he represented, representatives of the Sandals Cricket Foundation and Massy Insurance Saint Lucia Limited, friends and relatives from Chaz’ hometown and others in a ceremony that saw close to 3,500 individuals young and old in attendance.

Pallbearer, Stavone Gabriel, national Under-15 cricket player (2014) who played along with Chaz that same year and the rest of that squad including captain Kimani Melius were joined by former and current youth players in a guard of honour.

Chaz died on Saturday 31st August after the car he was driving hit a utility pole on the Union/ Babonneau highway. He was pronounced dead on the scene by a medical doctor.

Leading the service was moderator Travis Berrance, while the Homily was done by Pastor Terry John of Trinidad and Tobago.

The Saint Lucia SDA Academy, Bocage Academy and Vanard SDA Church, and Shirley Ann Cyril-Mayers performed special renditions, and there was also a 30 second tribute from the Pathfinders of Dominica.

Casheena Emmanuel along with Chaz’ younger sibling, Joshua remembered the batsman as a “shining light.”

According to Casheena, “Chaz started his innings of life on March 16th 2001 at 10.35 a.m. at the Victoria Hospital. He was the first of Samina and CirusCepal. He came into this life a bouncing baby boy weighing 7 lbs 2 ounces, the approximate weight of 18 cricket balls. I imagine that both Samina and Cirus must have concluded that this was an “An Unbelievable shot”.

Chaz happily attended his first schooling at his aunt Piloute’s Preschool, which included daily truck rides with his uncle T-Bar, the highlight of most days.

At the age of 3, Chaz was registered at the Millennium Preschool. He attended for the first four days and then refused to return. He was unable to adjust to the restricted nature and daily routine of this new school environment which was so different to the experience at Piloute’s Preschool with the freedom and excitement and particularly the truck rides with uncle T- Bar.

“Chaz started Grade K unable to identify the letters of the alphabet, but by midterm he excelled in every subject,” Casheena said. “He had a passion for Mathematics. In Grade 2, he wrote MST and got a score of 84% in Mathematics. His father was not satisfied and went back to get his script at the Ministry of Education to verify the score.”

Life in Vanard at the family home was exciting, with regular cricket matches indoors and the occasional broken fixture as a result. Yet in those times, a still small voice would utter, “oops…”, then “brilliant shot!”

For Chaz, school and cricket were in sync; one could not go without the other.

From young he was also very involved in church activities; Adventurer, Pathfinder and Master Guide clubs. He was an excellent drill instructor and had a knack for working with younger children.

According to Casheena, Chaz was constantly keeping everyone busy.

“Chaz liked to talk,” she said. “Most of his teachers submitted that he excelled but was unable to stay quiet. It was so difficult to discipline him because despite that school was not a priority for him; he kept coming in first place.”

After completing primary school, Chaz registered at SDA Academy where his father served as principal at that time. According to Casheena, “That was an exciting and captivating four years. Chaz would say, ‘Garson my father never beat me but I got licks from the principal’. Yes, his father did not show any favouritism but held him to high standard.”

In his final year at school his exuberance and youthful energy got him in trouble. He was suspended for a week and was required to perform community service. He gladly performed his duties bringing joy to the homeless as he fed them and upstairs Wings of Love. He developed a rapport with them and played games with them, even speaking to them about the importance of being disciplined and responsible.

Family meant everything to Chaz, you just had to tell him, “this is your cousin” and he would take it from there.

His church family was special to him, especially his interaction with the older and senior ladies.

His bubbly, outgoing personality and his genuine love for people enabled him to connect with his school friends and cricket colleagues and coaches including Alton Crafton, John Eugene, Keith Charlery, and all he came into contact with.

The commendation of love and warmth was tremendous from start to finish and as Chaz’ parents Cirus and Samina and his younger brother wept alongside the casket, the pastor asked the congregation to start praying for the family, to which they obliged, and what a sight it was.

When the dust settled, Stavone Gabriel, Chaz’ National Under -15 cricket team mate and the other pallbearers placed Chaz’s casket into the hearse for a procession from the Daren Sammy Cricket Ground to the La Bayee cemetery.

The final curtain will be drawn on Chaz’ life in the Thursday 12th September edition of the VOICE.