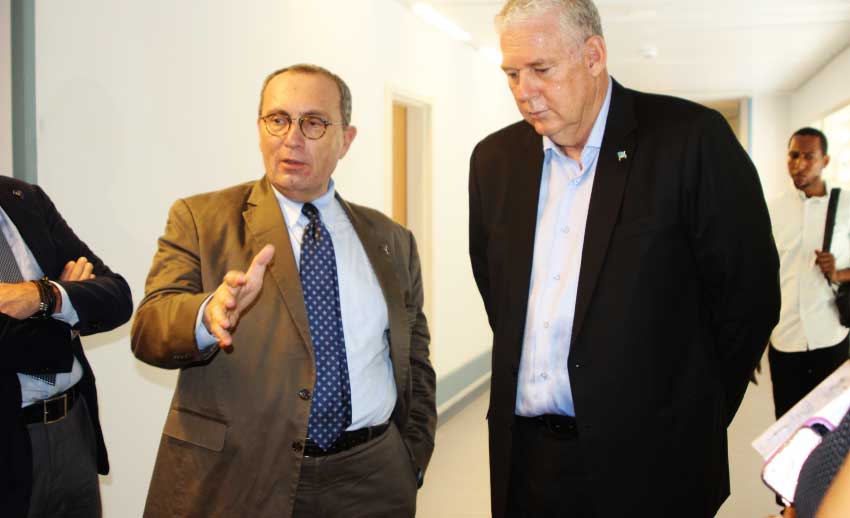 THE European Union (EU) is not pleased with the current status of the Owen King European Union (OKEU) Hospital at the Millennium Heights Medical Complex and wants government to make it fully functional as quickly as possible.

The pronouncement was made by Stefano Manservisi, the European Union Commission’s Director General for International Cooperation and Development who last Saturday met with Prime Minister Allen Chastanet, Health Minister Mary Isaac and other officials from the Ministry of Health and Wellness.

The group had a walk-through of the hospital before settling down behind closed doors for in depth discussions on the hospital and a new framework of relationship between the European Union and African, Caribbean and Pacific countries.

Manservisi gave a rather frank assessment of his impression of the hospital, which included a desire to see it fully functionable and working in the interest of all Saint Lucians.

Manservisi spoke to reporters after the hospital tour and noted that the facility is a flagship creation of the European Union in the region, one that must work since it took 45 million euros of tax payers’ monies in the European Union to pay for it.

“Let’s be frank, this is one of the biggest investments the European Union has had over the years. This is a flagship that must work,” Manservisi said.

Noting that the operating style of the hospital is not for the European Union to decide but rather the government, Manservisi said that from the European side it came as a disappointment to see the hospital not fully functional.

“…but now my point is not to look backward but to sit with the prime minister and see how this can start working in the interest of the people of Saint Lucia,” Manservisi said.

When asked on a scale of one to ten how satisfied he was with the hospital Manservisi said two because only two sections were in operation, which are the dialysis and the physiotherapy.

“This hospital has been decided years ago. The first urgent thing is to make this hospital functional,” Manservisi said, adding that it is not the prerogative of the European Union to decide for the government who to give the hospital to for management, and under what conditions, be it through a public–private partnership (PPP), privatization or any other.

“We can give our experiences but this is a decision for the government not us. Our interest is to be assured that whatever the model chosen the service is delivered in an affordable way,” Manservisi said.

Prime Minister Allen Chastanet explained that the hospital was well on its way to being fully functional but for unforeseen reasons its progress had to be curtailed. He told reporters that every time a date was set for actually moving in a problem was encountered.

“And so, eight, nine months ago the air conditioning system broke down. We had to get it fixed. The company that was being used no longer exists so we found a new company that bought over the old company and that company now has agreed to help us put in a new system,” the prime minister stated.

According to PM Chastanet, the Ministry of Health and Wellness was about to move some other departments from Victoria Hospital into the OKEU but that had to stop due to the failure of electrical breakers. His office, he said, has made available financial resources to the hospital.

“This is an absolute, total priority,” he said. “We have regular meetings in terms of keeping updated on where we are in the overall transition. The prime minister pointed out that even if government was to operationalise the hospital there are still a lot of unknowns to be dealt with such as how much it would cost to operate the hospital, now that the thirty-five million dollars it cost to operate Victoria Hospital would now be transferred over to the OKEU.

“Even if we cannot be physically in Victoria, elements of Victoria will be placed in an upgraded facility on the Chaussee so that’s an additional amount of money that will be created in that position,” Chastanet said.

“The (health care) system we are looking at is a system where the government will continue to pay the salaries of nurses and doctors, provide utility cost and do all the capital investment. The insurance premium would be to cover the doctor visits, prescriptions and operations. Once we are able to achieve that, that would be a remarkable step in terms of taking the country to the next level,” the prime minister said.

Regarding the model of operation for the OKEU the prime minister said his government had been in discussions with several groups from near and far. However, the group that seems to have come up with the best operation plan for the hospital is Cayman Health City.

Prime Minister Chastanet believes should a contract be given to Cayman Health City it would put in place an operational structure, assist government in interviewing the people transferring over from Victoria Hospital, and providing additional training where necessary.