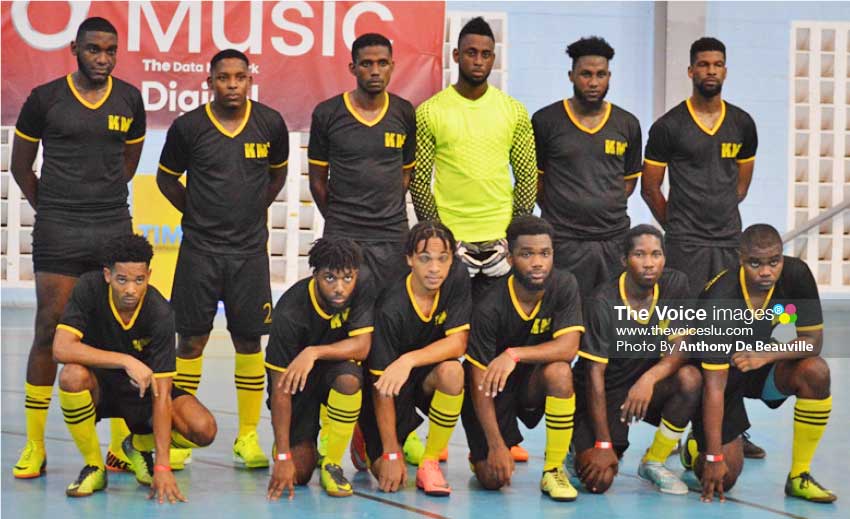 IT was another thrilling weekend when fifty nine goals were scored in eight matches at an average of 7.375 goals per game as TimeOut Entertainment staged day 3 of the fifth edition of the Corporate Warfare Futsal tournament 2019 at the Beausejour Indoor Practice Facility.

With an appreciative crowd on both days supporting their respective teams, a number of goalkeepers were kept pretty busy between the uprights. Some of the notable highlights of the two day showpiece was a 11 – 0 drubbing by Digicel over Apps 758; Eden Charles (Infrastructure) scoring 4 goals; Lincoln Phillip (Ferrands), Devon St Prix (Digicel) and Tev Lawrence (Sandals Grande) each scoring a hattrick and defending champions Saint Lucia Teachers Civil Cooperative going down to WASCO 5-3.

The total number of goals to date has rocketed to 73 in 12 matches.

On the resumption, Trevon St Prix (Infrastructure) started things off in the 28th minute to make it 4-2; five minutes later Malik St Prix put Infrastructure further ahead (5-2). Within seconds, it was 6-2 as Eden Charles scored his fourth in the encounter. By then the Legal Team was down and out, their mental toughness and energy out the window for this fast paced game. There was still time on the referee’s watch to allow Kamali Charlemange (Infrastructure) to add more salt to Legalsteams wounds scoring in the 37th and 40th minutes to make it 8-2).

Game 2, Small Business Owners (SBO) opened their campaign with a 2-1 win over Top Ranking, with goals from Leroy Alexander in the 7th minute and Christopher St Catherine in the 26th minute. Rohan Alphonse pulled one back for Top Ranking on the stroke of regulation time (40th minute).

Game 3, KM2 with their usual crowd support behind them made light work of Builtec defeating them 3-0 with goals from national cricketer Tonius Simon in the 10th and 26th minutes and Jason Similien in the 9th minute of play. The halftime score was 2-0.

Game 4 was a ding dong battle between rivals Flow and Ferrands with Flow nosing ahead 6-5 with goals from Kissinger Anthony in the 7th, Rahim Peters in the 13th and 30th minutes, Nicky in the 35th minute and Marlon Christopher in the 36th and 38th minutes.

For Ferrands, Kerwin Brette opened the scoring in the 15th minute and prolific striker Lincoln Phillip equalized in the 20th minute; Phillip went on to score two more goals in the 29th and 31st minutes (hattrick), and Eytran Paul in the 32nd minute.

On Saturday 14th, patrons got their money’s worth as 32 goals were scored, with telecommunication company, Digicel scoring 11 against Apps 758. The half time score was 6-0. The goal scorers then were Brandon Eugene in the 3rd and 20th minutes. Devon St Prix had two quick strikes (10th minute), Melvin Doxilly in the 13th minute and Dwayne Christopher in the 19th minute.

On the resumption it was more of the same as Digicel literally marched through Apps 758 in all facets of the game to score a further 5 goals. Alex St Cyre started the humiliation in the 24th minute, Devon St Prix in the 26th minute, in the process scoring his first hattrick. Christopher Vassell in the 34th minute, Simeon Lewis in the 38th minute and St Cyre in the 38th minute (his second goal in the encounter) rounded things off.

Certainly it was a learning experience for first timers Apps 758 and one hopes Saturday evening’s humiliation was just a one off experience. It must be noted, Renwick and Company holds the record for the most goals scored in the tournament, 15 plus versus C.O.Williams at the same venue.

In Game 2, Sandals Grande leading with a hattrick from the boots of Tel Lawrence in the 9th, 20th and 38th minutes of play defeated Beachcomber 5-2; Melvin Aurelien was the other goal scorer for Sandals Grande getting two at the back of the net in the 11th and 17th minutes.

For Beachcomber, the lone goal scorer was Jermain Monrose in the 18th and 31st minutes.

Saint Lucia Teachers Union (SLTU) despite being 3-0 at the half were made to work hard by Unicomer; Lynch Isidore put SLTU ahead in the 12th minute and quickly doubled the score line three minutes later (15th minute), while Zachary Edwin made it 3-0 in the 17th minute.

On the resumption, three minutes into the half Edwin made it 4-0. Jonathan Octave (Unicomer) cut the deficit by one in the 24th minute with a right foot shoot that eluded the SLTU goal keeper. With a minute left, Arthur Augustin (Unicomer) scored a consolation goal to make it 4-2.

The final game of the evening between Saint Lucia Teachers Civil Cooperative and WASCO maintained all the hype and back and forth talk which took place at the official launch held at the Financial Administrative Centre, Pointe Seraphine recently. Even before the main tournament draw on the evening WASCO representatives shouted, “Is you’ll we want to play first,” and the response from SLTCC was, “Yes, you beat us last year in the first game, but who is the champion team for 2018, teachers teach?”

Well it was much of the same, as both teams had their supporters behind them. On centre court WASCO was a handful for the defending champions, defeating them 5-3, and what a game it was from start to finish.

SLTCC went ahead in the 4th minute and Nehemiah Wilfred the goal scorer. Soon it was 1-1 Valdez Maximin (WASCO) in the 7th minute; WASCO seized the upper hand and went up 2-1 in the 10th minute courtesy SahavelBrin and that’s how the scoreline remained up until the halftime whistle of referees Leo Clarke and Andrew Phillip.

On the resumption, WASCO quickly moved into their strides making it 3-1 in the 22nd minute with a goal scored by Richard Annius. Annius would find the back of the net for the second time on the evening in the 30th minute (4-1) in favour of the utility company, and by then the celebration had started in the stands only for Davis Christopher to push them further ahead in the 34th minute (5-1). SLTCC never for once gave up as they kept the heads high and refocused.

With not much time left, Kirby Felix (SLTCC) pulled one back in the 37th minute (5-2) while national athlete and CAC bronze medalist in Lima, Peru, Albert Reynold (SLTCC) scored a beauty in the 40+1 minute of added time to make it 5-3.