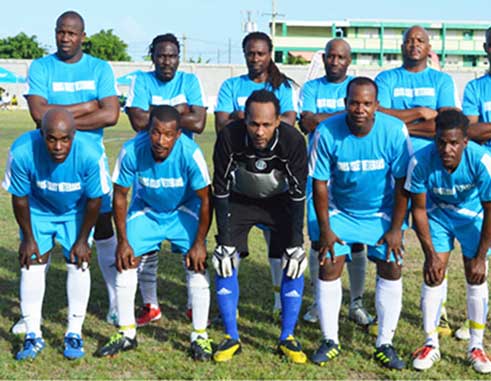 FOOTBALL action continued last evening in the 2017 Veterans in Sports Inc Caribbean Alliance Insurance Cup in conjunction with the Saint Lucia Football Association. In a double-header at the La Ressource playing field, Micoud Veterans were down to play Mon Repos Sharks and Congorians took on Valley Ledgens in a must-win situation for Valley Ledgens.

Meanwhile, in matches played at the Phillip Marcellin Grounds this past weekend, in Group A, defending champions VSDAC — on the brink of being relegated from the Caribbean Alliance Insurance Cup — had to dig deep within to defeat Marchand Veterans 3-1 with goals from Gilroy Mitchell (43rd minute) and Benjamin Gabriel (48th and 65th minutes), while Jermain Calendar scored one for Marchand (29th minute).

In game No.2, Group B leaders Anse la Raye played to an exciting goalless draw with Caricom Masters as both teams went on to share the points. Ansela Raye have completed their quota of matches and lead the group with 10 points. Caricom Masters with 1 game in hand are currently in second place on 5 points and the final game will see them play Central Vieux Fort on Saturday in a crucial encounter.

Game No.3 has been a tough uphill battle for newcomers Canaries Veterans, this time losing to Central Vieux Fort 2-0. The goal scorers for CVF were Titus Elva and Damian Henry.

This means that Canaries are out of contention for the main championship, the Caribbean Alliance Insurance Cup, and will now have to regroup going into the Plate Championship.

With two matches played, Vieux Fort Central are currently on 3 points; they will face Caricom Masters on Saturday at the PMG and Behind the College All Stars next week Thursday at the Gros Islet playing field.

Last Sunday, newcomers LabowiConnextions and Gros Islet Veterans played to a 1-1 draw after both teams squandered a series of scoring opportunities. The halftime score was nil-all.

On the resumption, LabowiConnextions went ahead in the 52nd minute when Romeo Cox’s right foot shot eluded Gros Islet goalkeeper Dermot Chris Monrose to his right to start a celebration which was short-lived. After squandering an easy opportunity, Gros Islet striker Roger Celestin made amends in the 62nd minute with a well-taken low shot which passed LabowiConnextions custodian Leroy Willis. Despite both teams’s urgency to take the lead, the score-line remained the same up until the final whistle.

Gros Islet Veterans now lead Group D with 7 points and with one match in hand and that’s against on Mon Repos Sharks next Tuesday at the Gros Islet playing field. LabowiConnextions are one 4 points with one game in hand and are scheduled to play Flow Lancers FC on Saturday at the PMG in a must-win situation.

In game No. 2, All Blacks: Dennery defeated Vieux Fort North 1-0, a goal scored by Mark Francis in the 26th minute. This means that All Blacks: Dennery have qualified for the knockout stage of the tournament and currently head Group C with 10 points, followed by Soufriere Veterans on 7 points.

In the final game on the evening, Vieux Fort South continued their good run on form in this year’s tournament, defeating archrivals Valley Ledgens 1-0, a goal scored by Douglas Marcellin in the 51st minute.