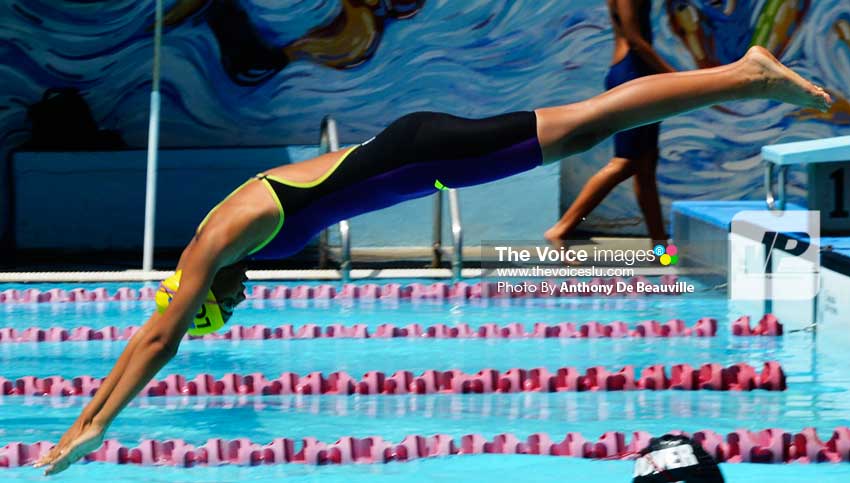 THE 2017 sports year was crammed with activities from beginning to end. Some were must-see, some disappointing at times, and the crowd support was neither here nor there. Not even The VOICE Sports Desk could have filled all the highlights in its editions.

Although no extraordinary achievement was witnessed throughout the year, individual athletes and some sports managed to earn honours while others remained non-existent.

Female cricketer Qiana Joseph, 16, made her debut for the West Indies senior women’s team in the ICC Women’s World Cup in England. At age 16, prolific opening batsman Kimani Melius became the youngest cricketer from Saint Lucia to make it on the West Indies Under-19 World Cup Team to play in the ICC Tournament in New Zealand starting in January 2018.

Here is a glimpse of some of the stories from The VOICE that helped define 2017. With all the media attention devoted to politics, crime, and an active hurricane season which left destruction and death in the northern Caribbean, and the many social ills that stare us in the face, you might have missed these events.

February: Sports Awards – Thirty-one-year-old No. 3-ranked world high jumper, Levern Spencer, won her 14th consecutive Sportswoman of the Year title, extending her record of winning the title stretching back to 2000 when she first won the senior category.

Having won the award in 2013, Johnson Charles picked up another Sportsman of the Year title. Although absent from the ceremony on the night, the West Indies T20/ODI and Saint Lucia Zouks and Windward Islands opening batsman copped the award ahead of 2016 Rio Olympian Jordan Augier (swimming), Julian Biscette (volleyball) and U.S.-based Marbeq Edgar (athletics).

In the junior category, the Sportswoman of the Year was record-breaking swimming sensation Katie Kyle, who held off stiff challenges from defending title holder, Julien Alfred (athletics) and Meggan Nestor (netball).

Youth cricketer Johnnel Eugene had something to smile about as he retained the award for Junior Sportsman of the Year for the second consecutive year, equalling the record in that category with Sergio Fedee (cricket, 1997-1998) and Runako Daniel (swimming, 2009-2010). Eugene defeated Nathan Ferrari (boxing) in what appeared to be a close call on the night and Levi Leonce (volleyball).

The girls were swim six races each. Katie Kyle (14) and MikailiCharlesmagne (13) will were named to compete in the 50-metres and 100-metres back stroke, butterfly and freestyle. Naima Hazel, 11, who would be participating for the first time at CARIFTA, entered for 50-metres of all fours strokes, as well as 100-metres freestyle and 100-metres breast stroke.

The Saint Lucia Olympic Committee Incorporated expressed regret at the passing of journalist Lawrence James who died in March.

James had been in the mainstream media for over 40 years during which time he covered several activities organised by the Saint Lucia Olympic Committee Incorporated and had the distinction of attending an International Olympic Academy session in Athens, Greece, on the recommendation of the SLOC.

James was editor of the MIRROR newspaper at the time of his passing and enjoyed a long career in the field of sports reporting. He first started as a proof reader at The VOICE newspaper before going into the editorial department. His disciplined approach to life was nurtured as a longstanding member of the Saint Lucia Cadet Corps where he rose to the rank of Major and edited the Corp’s magazine.

April: Close to seventy youth footballers, between the ages of 13 and 16, had their skills put to the test at the Flow Ultimate Football Experience, a competition put together by Flow and Manchester United Football Club and supported by the Caribbean Football Union. The one-day event, which took place at the Sab Sporting Facility, saw a number of boys and girls vying for the chance to participate in a talent development football camp in Trinidad and Tobago, and possibly win a trip to Old Trafford, Manchester to visit the Theatre of Dreams, and get to see Manchester United play live.

At the end of it all when the dust was settled, 13-year-old Jeremiah Justin of Northern United (Gros Islet) and Djal Augustin of 1987 All Stars (Anse La Raye) best demonstrated the abilities needed to compete with 28 other footballers from the other 14 Flow markets around the Caribbean.

Sir Arthur Lewis Community College powered their way to a 3-0 win over St. Mary’s College to emerge champions of the Schools Under-20 Volleyball tournament organised by the Department of Youth Development and Sports, which came to a close on Thursday, April 6 at the Vigie Multi-Purpose Sports Complex.

Gros Islet defeated Mabouya Valley 2-0 in the grand final of the Saint Lucia Sports Online-sponsored SLFA Under-15 Inter-District Football Tournament. Despite a missed penalty opportunity, Gros Islet found the back of the net through Simeon Francis and Jahlil Evans to seal the victory.

May: Elite boxer and team captain, Lyndell Marcellin, marshalled Team Saint Lucia to victory at the 2017 OECS Boxing Championship which took place at the Beausejour Indoor Practice Facility. Marcellin won on unanimous decision over Charles Leatham of Dominica. The home team captured 2 gold and 13 silver medals after accumulating 16 points; eclipsing Grenada on 14 points and Antigua and Barbuda with 10 points, respectively.

Canaries emerged champions of the 3rd edition of the Super League Football Tournament, defeating the National Under-23 men’s team in the finals by 1-0 at the DSCG, a goal scored by Bradley Tisson via the penalty spot to take home the EC$30,000, the championship trophy and goal medals. For the third place silverware, Vieux Fort South trounced Central Castries 5-1 with Antonio Joseph scoring a hat trick, and 1 goal each for Liam Savery and Kurt Joseph, while Travis Valcin pulled one back for Central Castries.

The Corinth Secondary School held a grand ceremony in honour of West Indian Qiana Joseph. The Grande Riviere native had recently been named on the West Indies team which was to compete in the 2017 Women’s World Cup. At the ceremony, CEO of Vizions Entertainment, Edward Fedee, presented a cash donation collected at the knockout stages of the 2017 Vizions Super League. Super League collected $3300 which was presented to Qiana.

Fedee said he was touched by Qiana’s story and felt that the organization had to make a contribution. He thanked the many football fans who came forward to show their support for the young aspiring female cricketer.

The Government of Saint Lucia indicated that centres of excellence for sports would be established on the island to further nurture sports development in a more strategic fashion. The word first came from Lenard Montoute, who spoke at a ceremony for the successful national Under-15 team. Montoute, who is a former national athlete, indicated that the centre will ensure that athletes excel in multiple areas of sports.

Also at the ceremony, Saint Lucia’s Prime Minister, Allen Chastanet, went further. He indicated that the Centre of Excellence will be established in Gros Islet. The former basketball player indicated that Gros Islet provided most of the facilities needed to establish an area where young athletes could develop their talents.

The Prime Minister went on to indicate that the centre will focus on salient aspects of sports, including sports nutrition and dieting, sports psychology, and strength training.

Saint Lucia’s three-time Olympian and multiple Sportswoman of the Year winner, LevernDonaline Spencer, won her third gold medal for the outdoor season. Competing at the Guadeloupe International Meeting, the world ranked high jumper defeated a classy field of 8 other jumpers to win the gold medal with a first attempt clearance of 1.92 metres. She also had first attempt clearances at 1.80 metres, 1.84 metres, and 1.90 metres, on her way to winning the gold. With that clearance, the CAC region’s No.1 high jumper broke the old stadium record of 1.91 metres which she held jointly.

This performance placed Spencer, the 6th place finisher from last year’s Rio Olympics, in third place on the IAAF World List for 2017.

A squad of 13 players was selected to represent the island at the Windward Islands senior cricket tournament scheduled for Dominica from May 20-26. The team, which was again captained by Craig Emmanuel, included two newcomers — wicketkeeper/batsman Stephen Naitram and fast bowler JemmiMauricette. Also included was West Indies T20 batsman Johnson Charles.

Vieux Fort South emerged champions of the SLFA Under-16 Female Football Tournament held on Saturday, June 13 at the Phillip Marcellin Grounds in Vieux Fort. VFS defeated Soufriere 2-1. The goal scorer for VFS was IllanaLashley (2), while Gian Henry pulled one back for Soufriere late in the second half.

For third place, Gros Islet defeated Marchand by 3 goals to 1. The goal scorers for Gros Islet were Kensha Joseph (1) and Vionce Weeks (2). The Award for Most Valuable Player was awarded to Ilana Lashley from Vieux Fort.

June: The Rogues Rugby Club of La Clery played undefeated and amassed a total of 143 points to emerge champions of the inaugural Magnificent 7 Rugby Extravaganza Tournament hosted by Whiptail Warriors. The event was held at the Sab Sporting Facility..

It was the first time that the Soufriere Lions competed in an official tournament and this was due in part to transportation costs being covered by Anse Chastanet/Jade Mountain Resorts.

In the end, Rogues Rugby Club trounced Mongoose 57-0 in the finals for the males while Tokyo Drifters had the better of Terminators in the crucial final game in the female segment.

(The remaining highlights for this year’s sports will be published in subsequent issues of The VOICE).