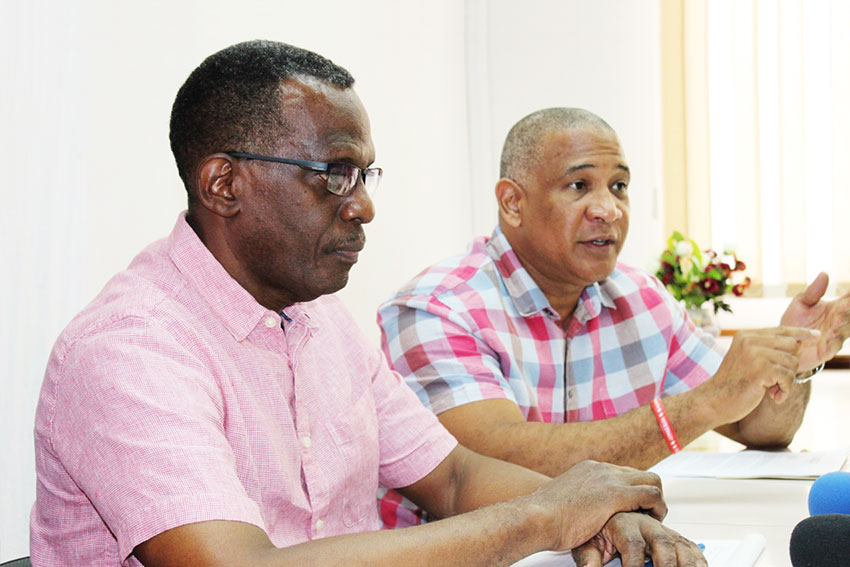 THE Government’s Christmas Stimulus Pro-gramme, which officially began yesterday, has inflamed opposition parliamentarians to the point where they have reverted to calling the government wicked and discriminatory.

The six opposition parliamentarians say their gripe has to do with the timing of a letter addressed to each of them, asking them to submit for consideration 51 persons to be employed in the programme, which is similar to the programme ran by the former administration around that time of the year, called STEP. Also angering the opposition parliamentarians is the amount of money allocated them for their constituencies out of the total amount for the programme.

Dr. Ernest Hilaire, the Labour Party’s spokesperson on investment and business, said that out of a pool of $2.7 million for the programme, each opposition parliamentarian received $20,000 — a total of $120,000 out of $2.7 million. He termed the amount as ludicrous and an act of victimization by the government to people in his constituency who need the financial help this Christmas.

“To give the opposition $120,000 to share among themselves out of $2.7 million and to give us less than 12 hours to get and mobilize people to start work is rank, brazen, victimization because everyone deserves an opportunity to have something for the Christmas. When they think they are hurting the parliamentarians, they are not hurting us, they are hurting the poor people who deserve something for the Christmas,” Dr. Hilaire said yesterday.

Intensifying Dr. Hilaire’s anger and that of his political leader, Philip J. Pierre, who held an emergency press conference yesterday, is a letter from the St. Lucia Social Development Fund (SSDF).

According to the Castries South parliamentarian, he received the SSDF letter on Thursday at 5:00 p.m., inviting him to recommend 51 persons to be considered for employment under the programme, which involves small community clean-up initiatives which are short-term and labour-intensive in scope, and that he must submit those names well in advance of the commencement of work beginning the following morning at 7:30.

To Dr. Hilaire, this was clearly an impossible situation and, further, there was not an equitable distribution of the $2.7 million for the 17 constituencies.

The SSDF letter to Hilaire begun with: “Please accept my humble apologies for this extreme late request. The SSDF is preparing for the implementation of the 2017 Christmas Stimulus programme which will commence on the 15th – 22nd December 2017…..with payment scheduled for the 22 December, 2017.”

Further down in the letter, it says that “in order to preserve the integrity of the programme, while simultaneously facilitating a seamless payment process, it is imperative that the SSDF receives the names and ID information of all workers well in advance of the commencement of work generally, but due to time constraints, no later than 18 December 2017.”

The letter signed by Allison Mathurin, Executive Director, was not dated.

Also perplexing to Dr. Hilaire is the SSDF’s assertion that the programme commences on December 15 (yesterday) when for the past two weeks people were seen in his and other communities doing work usually done under the programme.

“For a couple of weeks, there have been people cutting and cleaning all over the country. Not one of us (parliamentarians) was asked to recommend a name. When the communities have been virtually cleaned and cleared and all that is left is the rubbish packed on a side, you’re telling us yesterday afternoon to get people to work the next morning by 7:30 a.m. and if we cannot give you the names now, no names can be given after that. Clearly, this is designed to make sure you do not get people to work because of the sheer timing in which it is done. This is pure victimization,” Dr. Hilaire said.

Efforts to contact the SSDF’s Executive Director yesterday were futile.