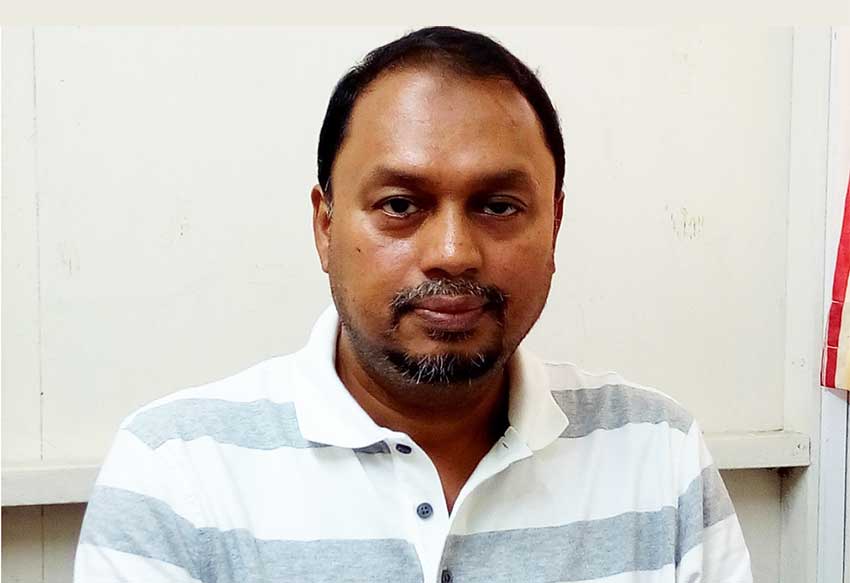 ONE chapter in the saga of Dr. Iftekhar Shams of Lambirds Academy is over and another may be opening that may be just as harrowing as the first.

“By the grace of the Almighty, I am very happy today. The Almighty has proven me totally innocent,” said the President and Chief Executive Officer of the academy yesterday during an interview with this newspaper.

Dr. Shams’s elation stems from the fact that after spending two years in jail (from February 10, 2015 – February 27, 2017), making several court appearances, and paying huge legal fees and several other activities related to the charges brought against him, that he is now a free man with no police charges hanging over his head.

“I came here as an innocent foreign investor. Without being proven guilty, the Major Crimes Unit shut my one-month-running legitimate academy and put me in jail for two years with continued rejection of bail, seized all my bank accounts and businesses worldwide,” he said.

Dr. Shams’s personal story, and that of his academy, is well-known in St. Lucia, having dominated the headlines of media houses from February 2015 to the present.

Chapter one in the Lambirds Academy story entered the public domain with the official opening of the academy on January 26, 2015 and became the talk of the town when it was officially shut down by the authorities one month later.

From then onwards, it was one story after another featuring Dr. Shams and his academy. The stories had even woven themselves into the everyday lives of St. Lucians to the point where they openly discussed the merits and demerits of the stories, especially its human trafficking charges as 60 students of Asian origin claimed to have been victims of the academy, giving rise to the human trafficking charges.

To sum it up and put finality to its involvement with the academy, Invest St. Lucia in February of last year noted that what happened to Dr. Shams and the academy was not part of the established investment process of the country. Further that what actually happened was because there were issues in respect of the academy’s operations, and what it did and did not do was a matter for the criminal courts to decide but that Invest St. Lucia was not getting involved.

Then there was the emotional aspect of the story that got St. Lucians involved. Nearly 60 students from India and Nepal, most of them in their early twenties, were left unable to attend school, saying they were cheated of the thousands of American dollars they spent to come to St. Lucia.

With no place to go and in need of shelter and food, they appealed for help, causing St. Lucians to open their hearts. Food, lodging, and other necessities were given to the students. The government chipped in, as did groups, organizations, religious bodies. The stories about Dr. Shams and his academy were taking on dimensions never dreamt of since it hit national attention in February 2015.

Here is Dr. Shams’s account of another dimension, that of the police: “They (the police) arrested my students, took them to the police station and CID and virtually forced them to give statements against me and Lambirds Academy. The police told them the academy was fake and that this academy does not have any permit from the government to run in St. Lucia, and they must give a statement against me and the academy if they want their money back. So the students had no choice but to give their statements.”

But out of the gloom of imprisonment, rays of light began shining for Dr. Shams, who yesterday took a tremendous breath of happiness and with his face all lit up, said: “Today I am happy, I am free — all the cases are gone.”

But how did the cases disappear?

The money laundering charge, according to Dr. Shams, was dismissed on October 27, 2015. However, it was promptly appealed by the Office of the Director of Public Prosecution (DPP). That case finally ended last Thursday when Justice Louise Bledman struck it out.

The human trafficking case was dismissed almost two weeks ago, while the obtaining property by deception charge was withdrawn in January this year.

Of the eight charges under human trafficking, bail was set at $17,500 each, while for obtaining property by deception each of the 49 charges came with a $4,000 bond.

So what will Dr. Shams do now that he is a free man?

“I have no plans for any civil suit now, but I have a special request of the Honourable Prime Minister. Please issue an order to the DPP and the police not to harass me further. They have already destroyed me. I have nothing to lose,” he said.

He added, “Please let me start my life and regain my empire from here. I just need the Prime Minister’s support and the public support. That is all I need.”

As he enters chapter two of his saga with local authorities, Dr. Shams speaks of fearing for his life and his fear of the police now that they have lost all their cases. He also called on the Attorney General to write to the American Government immediately to unfreeze all his bank accounts and clear all the criminal records worldwide.

“Yes, I still plan to operate Lambirds Academy in St. Lucia because the students know now who is behind that and what happened,” Dr. Shams said, noting that he had proven to the students that he did not deceive them.

All the students, he said, came to St. Lucia through the legal channels and so there was no human trafficking.

“I’m afraid for my life because I cannot trust the police anymore. They slapped me with charges, now they lose everything because they did not have any proof. My co-defenders had nothing to do with Lambirds. I have not had discussions with the Prime Minister. If he gives me his blessings, I will stay here. If he does not give me his blessings, then I will have to decide what to do,” Dr. Shams said.

He said he paid all the students, all 60 of them, the monies he owed each of them, totaling EC$1 million.

Dr. Shams said he plans to reopen Lambirds Academy to teach exactly what it was advertised to teach in the first place, namely professional cooking and baking, hospitality management, etc. — seven subjects in all.

Dr. Shams said he had seven businesses in seven countries around the world and that the Government of St. Lucia had all of them frozen. His woes in St. Lucia with the authorities had also cost him rejection with Invest Dominica and Invest Trinidad.

He said he came to St. Lucia through Invest St. Lucia which invited him to attend their investment forum at Sandals in 2014.

“They sent me the invitation. We communicated through email. They arranged my visa and on coming here, the Prime Minister welcomed me. They did everything to get all the licenses for me. They were very helpful,” Dr. Shams said.