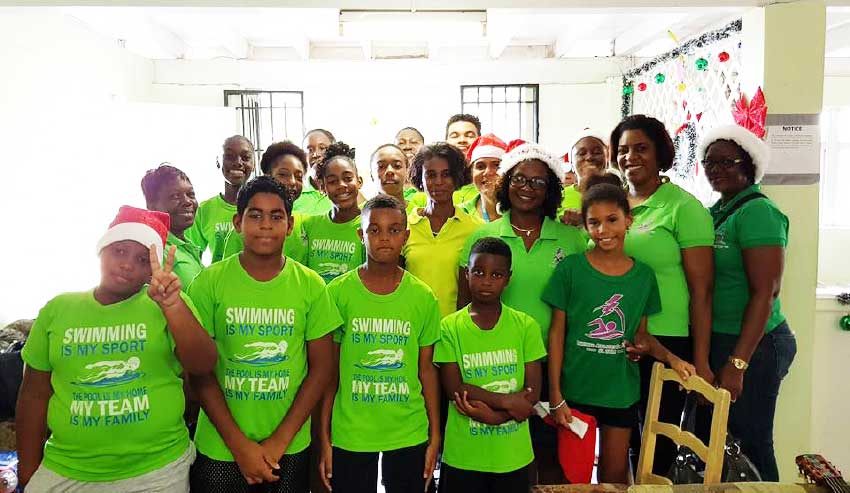 WITH just 12 of its 30 competitive swimmers, Lightning Aquatics (LA) Swim Club proudly walked away with 13th place out of 30 clubs from the Caribbean at the recent ASATT Invitational Swimming Championship. This regional meet was held in Trinidad and Tobago from December 14-17 and was hosted by the Marlins Swim Club of Trinidad, which placed second.

LA’s girls 11-12 relay team of Naima Hazell, Naekeisha Louis, Angelique Gaillard and Britney Edwin was also a force to be reckoned with as they dug deep to secure 2 bronze medals. A number of personal best times (improved times) were achieved by the swimmers with many ribbons being awarded for 4th- 8th places.

Coach Marlon James had this to say about their performance: “I was honoured to accompany our swimmers to Trinidad and was very happy with the overall performance of the team. I am very proud of the effort and attitudes displayed during this regional long course meet.

“The children challenged themselves to make their personal bests and achieved many accomplishments. It is reflective of the hard work that they have put in and their commitment to doing their best. It is through performances like these that the team will continue to be motivated to train hard.”

ASATT came less than one week after the club’s final community outreach activity dubbed Mission Possible: Warm Meals, Warm Smiles held on December 9. This activity allowed LA members to treat the residents of the Cornerstone Home to a warm lunch, carols and karaoke.

Cornerstone Home is a shelter for the homeless located in Castries. According to Tessa Charles-Louis, LA’s President, “It was indeed a successful mission that warmed the hearts of our members as well as the residents who joined in the merriment and sang along with members during the carol and karaoke session. This is what Lightning Aquatics is about, the wholesome development of our swimmers in and out of the pool.”