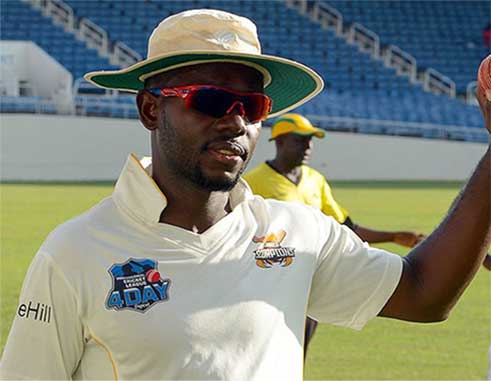 LEFT-ARM spinner Nikita Miller has been recalled in the 15-man West Indies squad after a two-year gap for the three-match ODI series against New Zealand, beginning on December 20 at the Cobham Oval in Whangarei.

The 35-year-old experienced left-arm spinner last played for the Windies during the 2015 ICC Cricket World Cup in New Zealand and Australia. He has made 46 appearances in this format.

Reflecting on Miller’s inclusion, Courtney Browne, chairman of the Cricket West Indies (CWI) selection panel, said, “Miller has played ODI cricket previously. Along with his vast experience in our domestic competitions, we felt he was the right fit to form a part of our ODI bowling unit at this time. With the World Cup qualifiers fast approaching, we felt this was not the right time to introduce an inexperienced slow bowler.”

“This series against New Zealand and our CWI Regional Super50 Cup next year are the only chances we will have for preparation prior to the World Cup qualifiers, which are scheduled to be played next March in Zimbabwe,” he added.

Uncapped fast bowler Ronsford Beaton has also earned a call-up in the ODI squad comprising the likes of swashbuckling batsman Chris Gayle and all-rounder Marlon Samuels, who were part of the Caribbean ODI team against England in September. Beaton, who was also named in the West Indies A squad for a home series against Sri Lanka A, seems to have earned a call-up in the ODI squad after bagging 11 wickets from 10 games in this year’s Caribbean Premier League.

For the T20I series, experienced all-rounder RayadEmrit has been called up for the first time in this format. A medium-fast bowler and powerful lower-order batsman, he played two ODIs for Windies a decade ago in India. Kieron Pollard and Sunil Narine have also been named in the T20I squad, while Samuel Badree, who missed West Indies’ previous T20 assignment in England, has also made a return.

On the selection of the T20 squad, Browne said, “The selection of Emrit is to fill one of the all-rounder roles. He has always been on the fringes of selection and now gets his opportunity. He is a wholehearted player, and has been a consistent performer in our domestic competitions and so the opportunity has now presented itself for him to join our T20I squad.”

Besides ODIs, West Indies and New Zealand are also slated to play a three-match T20Is series, starting December 29 at the Hagley Oval, Christchurch.