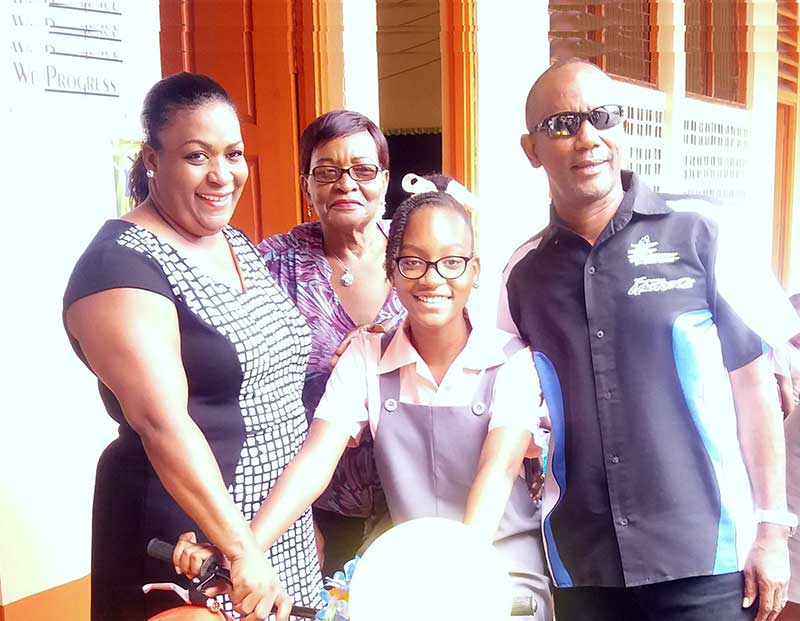 THE island’s top scorer in the Common Entrance Examinations (CEE) is already setting her eyes on new goals starting over the summer holidays, namely learning how to ride her new bicycle.

This year’s top student, Rhea Barrett of the Camille Henry Memorial School, was presented with her gift by Jevon Charles, a past student of the same school, who was in Barrett’s place six years ago.

The bicycle was provided by owner of Universal Cycle Centre, Pius Raveneau, who has for the twelfth year running brought joy to the hearts of top scorers in the CEE by rewarding them with brand new bicycles for their hard work.

The prize-giving ceremony took place during a special assembly held at the school on Tuesday morning and was attended by the entire student and faculty body.

Barrett scored a whopping 98.33 points in the exam and will be attending St. Joseph’s Convent in September.

Barrett said: “I’m extremely grateful for the bike and for the chance to finally learn how to ride. I want to thank everyone who is here today. I want to thank God and Mr. Raveneau. Now I’ll be able to get to places without the help of my mother. It’s a new form of independence.”

Her mother, Liota Charlemagne-Mason, expressed joy and pride in her daughter’s achievement and credited her achievements to hard work and dedication.

She also expressed gratitude to Raveneau for his contribution and said she hoped that he continues to reward the children in the way he has been doing for over a decade.

Raveneau thanked God that he was able to make the donation, as he said this is what makes him happy.

Raveneau said the reason he has been donating the bicycles was because he loves children. Since bicycles are his specialty, he decided to go the route that no one had gone down before.

He said: “After hard work, they (the students) should be rewarded with something. So I came up with the idea that I should give something, so I gave it, and I continue to give. Regardless of difficult times, I’m giving still, and I thank the almighty God for that. I will continue to give. Once He blesses me, I will bless others.”

Charles, who topped the island’s Common Entrance Exams in 2011, reminisced the time when he achieved top grades. He said although he did not receive as much fanfare, he was just as excited at the time as Barrett was.

He had a particularly special message to the boys who, in a notable fashion, have not performed as well as the girls island-wide over the years.

He said: “From what I’ve seen during my time at St. Mary’s College, the boys have all the potential that they need to kick on from here to greater heights. Boys right now have a lot of aspiration of what they want to be in the future. But a lot of those aspirations are materialistic. So I want to tell them to focus on aspirations but more realistic ones and work hard so that they can achieve them in the future.”